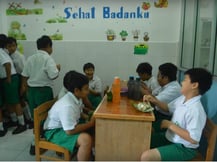 especially to those who seem to deserve it the least.

In this Sunday’s Gospel focuses on two people. Each did something quite out of the ordinary. Jesus and his disciples are passing through Jericho. Word had gone out and a crowd gathered to see Christ the preacher and miracle worker. One of the people had a particular problem: there were far too many already lining the road -- and he was short. So Zacchaeus decided to do something that might have surprised himself as much as the others. He climbed a tree to get a glimpse of Jesus. This was not just anyone in the community. He was the rich head tax collector for the Romans. That meant that he was despised for cooperating with the hated empire and for cheating his neighbors. But on that day, Zacchaeus was willing to risk looking like a fool. Something inside him urged him to do whatever was necessary to see the young rabbi. Then when our Lord got to the tree, He stopped and called up to Zacchaeus to come down. He said that He was going to stay with him. Christ did not ask any questions or wait for an invitation. And He certainly did not let the tax collector’s reputation as a hated outsider deter Him. “Zacchaeus stood there and said to the Lord, ‘Behold, half of my possessions, Lord, I shall give to the poor, and if I have extorted anything from anyone I shall repay it four time over.’ And Jesus said to him, ‘Today salvation has come to this house because this man too is a descendant of Abraham. For the Son of Man has come to seek and to save what was lost’” (Luke 19:8-10).

The crowd was shocked. It was utterly unthinkable for anyone to stay with a sinner and dine with him. And when Zacchaeus offered generous restitution to the people he had cheated and half his wealth to the poor, they probably did not know what to make of that either. Did he mean it? Could anyone repent and reform so quickly and completely? Of course Jesus knew the answer. He offered salvation and it was accepted. A most unlikely person had encountered Christ and responded to His invitation to forgiveness and mercy. To save what was lost -- this was why He came among us. This is why He walked along that Jericho road; and the road outside our own door as well.