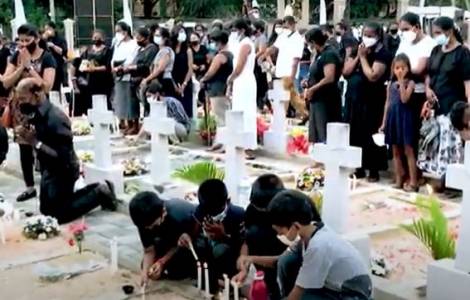 Our Lord has another encounter with His disciples after His Resurrection and...

all of them -- particularly Peter -- learn that following Christ in faith and love can demand everything.

In the reading for today from St. John’s Gospel, we find the Risen Jesus on the shore of the Sea of Tiberius, or Galilee, where He sees three His closest Apostles -- Peter, James, and John -- and four others in a boat fishing. They do not recognize Him. When He asks if they have caught anything, they reply that they have not. He tells them to cast their net on the other side and their nets are immediately filled with fish. At this point John recognizes Christ and Peter jumps into the water to rush to Him. Then “Simon Peter went over and dragged the net ashore full of one hundred fifty three large fish. Even though they were so many, the net was not torn.” (John 21:11) Our Lord already had a charcoal fire going and He proceeded to serve them breakfast of fish and bread. This vivid scene is reminiscent of that in the Gospel according to St. Luke when, at the start of His public ministry, Jesus used Peter’s boat to preach to a crowd on the shore. Afterwards, Christ tells the fishermen to go into deeper water and cast their nets. Even though they had caught nothing the night before, they do as Jesus tells them and haul in a huge catch. Peter, shocked by the miracle, begs our Lord to leave him because he is sinful. Instead, our Lord tells Peter, as well as James and John who are also there, that He will make them fishers of men. They instantly leave their former lives and livelihoods behind and become His disciples.

By the end of this Gospel passage, Peter has been chosen to follow Him, even to death. St. Peter and His other followers have been called to share the Good News of salvation with the whole world. In today’s first reading we find them courageously doing exactly what Jesus asked of them. “Peter and the Apostles said … ‘We must obey God rather than men. The God of our ancestors raised Jesus, though you had Him killed by hanging Him on a tree. God exalted Him at His right hand as leader and savior to grant Israel repentance and forgiveness of sins. We are witnesses of these things, as in the Holy Spirit whom God has given to those who obey Him’” (Acts 5, 29-32). We, too, have an obligation to draw others to Christ with our own lives. We, too, must be ready to model our faith in Him with our loving words and merciful example.