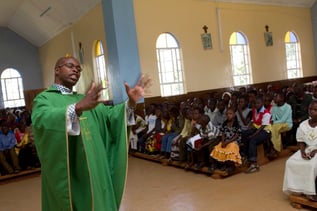 Jesus is not only the Ruler of the Universe, but also its center. That we human beings have the hope of life everlasting is only because of His sacrifice.

Jesus Christ the Son of God and Second Person of the Blessed Trinity has from His time on earth been considered a King by many if not all of His followers. However, it was not until 1925 that Pope Pius XI instituted a feast day honoring our Lord with this title. It was a response to the widespread growth of secularism, atheism, and anti-clericalism. The pope had a great concern for the laity, both in spiritual and material matters, and wanted the whole Church to focus on Christ as the center of every life. In his encyclical on Christ the King, Quas primas (In the first), Pope Pius XI stated that we must accept His kingship with our whole being: “He must reign in our minds, which should assent with perfect submission and firm belief to revealed truths and to the doctrines of Christ. He must reign in our wills, which should obey the laws and precepts of God. He must reign in our hearts, which should spurn natural desires and love God above all things. … He must reign in our bodies and in our members, which should serve as instruments for the interior sanctification of our souls.” In 1969, Pope Paul VI also wanted to highlight the importance of the universal Kingship of Christ. He made the date a solemnity and fixed it as the last Sunday in the liturgical year. Placed immediately prior to Advent, this timing emphasizes His Second Coming as well.

Jesus is not only the Ruler of the Universe, but also its center. That we human beings have the hope of life everlasting is only because of His sacrifice. In today’s reading from the letter to the Colossians, we hear: “Let us give thanks to the Father, who … delivered us from the power of darkness and transferred us to the kingdom of His beloved Son, in whom we have redemption, the forgiveness of sin. … For in Him all the fullness was pleased to dwell, and through Him to reconcile all things for Him, making peace by the blood of His cross through Him, whether those on earth or those in heaven” (Colossians 1:12-14,19-20). Jesus Himself said that His kingdom was not a human or worldly one. However, it does encompass the whole cosmos, time and eternity, in a way that we will appreciate only when we have, at last, entered His Divine presence.