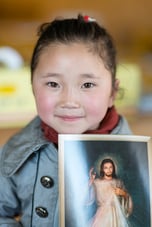 Through his Gospel, St. John wanted all who heard about Jesus to believe in Him, to accept Him as the Redeemer of the world and their own beloved Lord. And that is still true today.

On this Sunday following Easter we continue to learn how the Risen Christ encountered His disciples. The reading from the Gospel according to St. John tells us that our Lord appeared to the Apostles who were gathered together. They must have discussed the experience Peter and John had at the tomb that morning and everything that the women who had gone there had told them. But these men would probably have been beset by fear and guilt. They could not know the future or what would happen to them. Except for John, they also recognized that they had abandoned Him. So when our Lord actually stood among them they must have been overcome by gratitude when, instead of chastising them, He offered words of peace -- and power. He confirms the mission that He has already prepared them for and now entrusts to them. They will share His mercy and forgiveness with all people through the power of the Holy Spirit.

Then we find out that one of their number is missing. Thomas was not there. And when they later tell him what happened he refuses to believe them. He says that he will only be convinced by seeing and feeling the wounds of Christ. A week later, Jesus gives Thomas that opportunity. We do not know if he actually touched Jesus’ hands or side, but we do know his great expression of faith: “‘My Lord and my God!’ Jesus said to him, ‘Have you come to believe because you have seen Me? Blessed are those who have not seen and have believed.’ Now Jesus did many other signs in the presence of His disciples that are not written in this book. But these are written that you may come to believe that Jesus is the Christ, the Son of God, and that though this belief you may have life in His name” (John 20:29-31). Through his Gospel, St. John wanted all who heard about Jesus to believe in Him, to accept Him as the Redeemer of the world and their own beloved Lord. And that is still true today. We are among the generation of Christians who have not seen our Lord but believe in Him. And just as the Apostles and other early disciples became missionaries of the word of God through His Son, so we are called to share the gift of salvation. During this glorious Easter season, let us ask the Holy Spirit to guide us in sharing our faith as we go about our daily lives.