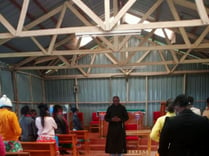 While he fulfilled his priestly obligations, it was not until he was called to hear the death-bed confession of a peasant that his life was transformed.

Born to a peasant family in southwestern France in 1580, St. Vincent de Paul was determined to find a better, more comfortable life for himself. He was a good pupil and so able to pursue his plan to become a priest. After his studies and ordination, St. Vincent eventually became a tutor in a wealthy family. While he fulfilled his priestly obligations, it was not until he was called to hear the death-bed confession of a peasant that his life was transformed. He became focused on the appalling poverty that prevailed in rural areas as well as in cities. He finally understood the good he could do as a priest dedicated to those in need. St. Vincent not only served them himself, he created confraternities of lay people to help their fellow parishioners in churches around France. Eventually he established an order of priests, the Congregation of the Mission, now known as the Vincentians. Along with St. Louise de Marillac, he co-founded the Daughters of Charity especially to serve those who were sick and poor. He instructed all of those who followed in his efforts to aid the suffering that “the poor are your masters and you are their servants.” St. Vincent was able to attract the financial support of many rich families in order to establish hospitals, relieve victims of war, and ransom galley slaves, in addition to other forms of assistance.

St. Vincent de Paul was also concerned about the spiritual education of priests which he believed was being neglected. He offered them retreats and even started seminaries. He made every effort to draw more and more people to personally assist in some way with care of those who lacked, not just the comforts, but the bare necessities of life. He said, “We cannot better assure our eternal happiness than by living and dying in the service of the poor, in the arms of Providence, and with genuine renouncement of ourselves in order to follow Jesus Christ.” In his early years, St. Vincent was said to have a difficult, irritable temperament. Yet as he threw himself into his service to God and His people, the disposition of the man now often referred to as the Apostle of Charity, changed became one of loving kindness toward all. He died in Paris at the age of eighty in 1660, and was canonized in 1737.