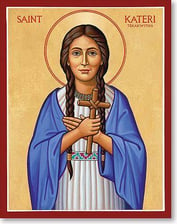 St. Kateri Tekakwitha served Christ with great love, despite her many personal hardships

She was baptized at age 19 or 20 and took the name Kateri in honor of St. Catherine of Siena. Her relatives resented her conversion and treated her harshly.

Today we honor St. Kateri Tekakwitha the first Native American of North America to be canonized. Born in 1656 in what is now upstate New York, she was the daughter of a Mohawk father and an Algonquin Christian mother. She lost her parents in a smallpox epidemic that also cost her some of her eyesight and left her face disfigured. Raised by relatives, she came to know and appreciate the Catholic faith through Jesuit missionary priests. She was baptized at age 19 or 20 and took the name Kateri in honor of St. Catherine of Siena. Her relatives resented her conversion and treated her harshly. After about a year, a priest encouraged her to travel to a village of Christian Indians near Montreal. There she practiced her religion with great fervor through prayer, penance and acts of charity. She even took the highly unusual step of making a public vow of virginity. With the care and guidance of a local priest and an older Iroquois woman, she continued to grow spiritually and developed a great devotion to the Passion of Christ. St. Kateri Tekakwitha died at age 24, during Holy Week in 1680. She was beatified 300 years later in 1980 by Pope St. John Paul II and declared a saint in 2012.

In the Gospel today we hear Jesus say, “All things have been handed over to Me by My Father. No one knows the Son except the Father, and no one knows the Father except the Son and anyone to whom the Son wishes to reveal Him” (Matthew 11:27). Certainly, our Lord revealed His tender love to her in a way that called forth Kateri Tekakwitha’s own deep devotion to Him. We honor her now as patron of Native Americans and of ecology. Her aid is also frequently sought by those who have lost parents or who suffer for piety.