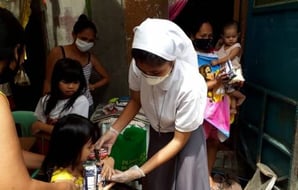 St. Frances Xavier Cabrini, the first citizen of the United States to be canonized

She was dedicated to serving Christ and His people, especially those in greatest need

Born in 1850 in the Lombardy area of what is now Italy, Maria Francesca Cabrini was the youngest of thirteen children. She long wanted to become a religious sister, especially a missionary. However, her frail health caused the order that taught her to refuse her entry. Instead she became a teacher and director of an orphanage and in time took private vows. In 1880, she established the Missionary Sisters of the Sacred Heart with other young women from the orphanage. She took the name, Frances Xavier in honor of the great missionary saint. Within the next few years, she was ready to pursue her dream of going on a mission to China. But in an audience with Pope Leo XIII, he suggested that she go to the United States to help the vast number of Italian immigrants who were settling there, saying, "My daughter, your field awaits you not in the East but in the West.”

Mother Cabrini traveled to New York where, even in the face of setbacks, she founded an orphanage. She traveled to a number of other American cities establishing dozens of schools, hospitals, and other institutions to help poor people. She was particularly dedicated to assisting the many immigrants from Italy and other countries who were making new homes in North and South America. She willingly endured hardships including more than 30 trips across the Atlantic in her efforts to serve others – and despite her lifelong fear of water and drowning. She was dedicated to serving Christ and His people, especially those in greatest need. She said, “I travel, work, suffer my weak health, meet with a thousand difficulties, but all these are nothing, for this world is so small. To me, space is an imperceptible object, as I am accustomed to dwell in eternity.” In 1909 she became a naturalized citizen. She died of malaria in 1917 at a hospital she had founded in Chicago. St. Francis Xavier Cabrini was canonized in 1946 and is now the patron saint of immigrants.