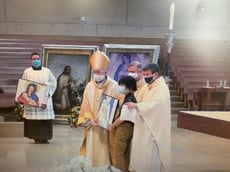 “Not a word nor a discourse whose voice in not heard; Through all the earth their voice resounds, and to the ends of the world, their message.” (Psalm 19:4-5)

"...built upon the foundation of the apostles and prophets with Christ Jesus himself as the capstone."  (Ephesians 2:20)

This is the feast of Simon and Jude, saints and Apostles. Like most of the Twelve who were so close to our Lord, we know little about them. Simon is called a Zealot and this might be a testimony to his strong personal faith and adherence to the law. However, it might also indicate that he was part of an extreme group who sought to free the Jewish people from the control of Rome. We never hear a single word from him in the Gospels or the rest of the New Testament. Jude was actually named Judas and that he was the son of James. He probably came to be called Jude to differentiate him from Judas Iscariot. He is also referred to as Thaddeus. He is quoted only once in the Gospels when he asks Jesus at the Last Supper why He will reveal Himself to the Apostles, but not to the world. Jesus speaks about importance of loving Him and of keeping His word – and that the really comes from the Father.

In the first reading today, we hear from St. Paul’s Letter to the Ephesians: “You are no longer strangers and sojourners, but you are fellow citizens with the holy ones and members of the household of God, built upon the foundation of the Apostles and prophets, with Christ Jesus Himself as the capstone” (Ephesians 2:19-20). It is a wonderful reminder of the deep significance of the Apostles’ missionary effort. The Church of Christ spread because of their willingness to undertake often difficult travels and daily risks in order to serve the Lord and build His Kingdom. It is believed that the Ss. Simon and Jude were traveling companions in preaching the news of Jesus Christ in several places, including what was then Persia. And it is also thought that they were both martyred in Beirut, Lebanon. Some of their relics can be found in St. Peter’s in Rome.