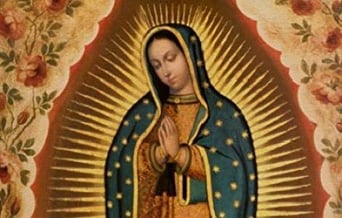 The Blessed Mother expressed through her appearance to St. Juan Diego and the unique gift that she left behind, God’s deep love for the people of the Americas, especially those who were poor and powerless.

In December of 1531, the Blessed Virgin Mary appeared several times to a poor, humble Christian convert of the Aztec people named Juan Diego. He lived near what is now Mexico City and was on his way to attend Mass when a radiant cloud appeared bearing a beautiful lady who seemed to be an Aztec princess. She spoke to him in his own tongue, saying that she was the Mother of God and asking St. Juan Diego to tell the local bishop to have a chapel built there. When the bishop wanted proof, Our Lady provided roses that were growing out-of-season on the hill where she came to Juan. When he opened his cloak, or tilma, to let the roses fall out in front of the Bishop, a magnificent picture of her was revealed on the tilma just as she had appeared to him. The symbols shown in the clothing and other features of this image show that the young woman is both a virgin and pregnant. Other symbols indicate both royalty and a relationship with the Divine. Within a few years after this miraculous event, millions of native people had become Christians. And the beautiful image on that cloak – still intact and unfaded after nearly 500 years – remains on display in the Basilica of Our Lady of Guadalupe in Mexico City.

The Blessed Mother expressed through her appearance to St. Juan Diego and the unique gift that she left behind, God’s deep love for the people of the Americas, especially those who were poor and powerless. In today’s Gospel we hear the Angel Gabriel speak to Mary at the Annunciation, saying, “Do not be afraid, Mary, for you have found favor with God. Behold, you will conceive in your womb and bear a son, and you shall name Him Jesus” (Luke 1:30-31). Mary is the mother of the Savior of the world and all of its people. Let us venerate our Mother, the Mother of God’s children, whoever and wherever they are. Let us imitate her generous love for our brothers and sisters everywhere, especially those in greatest need.