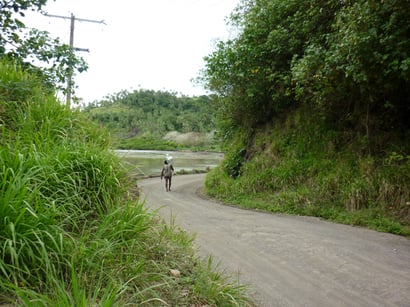 At last, when Jesus blessed and broke the bread and shared it with them, they knew. It was Christ.

In the readings for today, we hear two accounts from St. Peter in both his preaching and his writing that the Father sent Jesus of Nazareth to show His unfathomable mercy to the world. Peter, the first pope, assures all who pay attention to him that Christ is the Son of God who died on the cross and then rose from the dead. During this Easter season we are reminded of the essential truth that Jesus came to release each and every person who accepts His loving goodness from the dark consequences of sin and death. This is confirmed in the beautiful story from today’s Gospel about Jesus and the two disciples who travel the road to Emmaus together.

It was Easter day, and rumors had swirled around Jerusalem about the death of Jesus and how His tomb had been found empty that very morning. The two disciples were not able to recognize Jesus, and started to recount everything they had heard. He then chided them for not grasping what had been predicted about Him in the Scriptures. Clearly, they wanted to hear more and invited Jesus to stay with them. “While He was with them at table, He took bread, said the blessing, broke it, and gave it to them. With that their eyes were opened and they recognized Him, but He vanished from their sight. Then they said to each other, ‘Were not our hearts burning within us while He spoke to us on the way and opened the Scriptures to us?’” (Luke 24:30-32) When our Lord spoke to them, His words impressed them deeply, although they still did not see who He really was. At last, when Jesus blessed and broke the bread and shared it with them, they knew. It was Christ. Their eyes and their minds and their spirits were open to our Savior and they hurried back to Jerusalem to share the great news with the others who followed Him.

Suggested missionary action:  In these challenging days, let us read the Scriptures, listening for the Lord’s voice. And, as we watch Mass on television and online, let us make a Spiritual Communion, asking the Lord to come to us, to embrace our whole being.