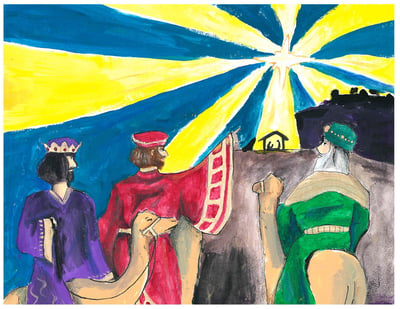 The magi, possibly astrologers from the east, follow a star in order to revere him. And then these men show just wise they are. When they find the Holy Child with His mother in a stable, lying in a trough usually used to hold the food of animals, they kneel to worship Him.

In the earliest centuries of the Church, the ancient feast of the Epiphany combined the elements of the birth of Jesus along with the coming of the wise men. But since the fourth century, we have celebrated them separately. Epiphany comes from a Greek word for manifestation or revelation, and the day focuses on the revelation of the Son of Mary as the Son of God to the Gentiles. Yet it is to seek the infant King of the Jews that the magi, possibly astrologers from the east, follow a star in order to revere him. And then these men show just wise they are. When they find the Holy Child with His mother in a stable, lying in a trough usually used to hold the food of animals, they kneel to worship Him. The lowly setting and humble family before them did not deter their belief that they had indeed found the King they had sought. So they offered the gifts of gold, frankincense, and myrrh that would have seemed more appropriate in a palace. The wonder and hope that opened the eyes of the magi to the light of a strange star finally led them to Christ. In the company of this Holy Infant, they discovered the King of the Universe – and their heart’s desire in a most unlikely place.

In the liturgy for today we hear St. Paul tell the early Christians who were made up of both Jews and non-Jews that “The mystery… has now been revealed to His holy apostles and prophets by the Spirit: that the Gentiles are coheirs, members of the same body, and copartners in the promise in Christ Jesus through the Gospel” (Ephesians 3:3, 5-6). The kingdom of heaven and the gift of redemption are given to all people. Through the death and resurrection of the Infant Jesus who was first lovingly laid down by Mary in that manger, an who would one day willingly lie down to be nailed on a cross. Christ is the Redeemer of all who claim Him as their own and who open themselves to His grace. Let us remember that as we continue our own journey through life, bearing in our hands whatever gifts we choose to bring our beloved Lord.

Suggested missionary action: Let us celebrate the Epiphany by offering presents to the Christ Child of prayer, loving-kindness, and gifts of charity through our actions and support for those in need.