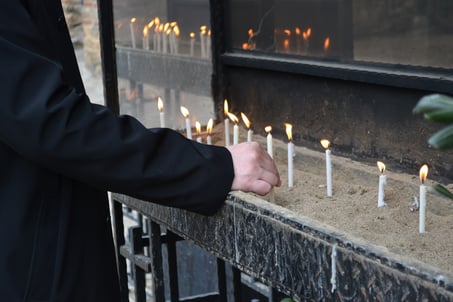 As we celebrate the feast of St. John the Apostle, we honor the writer of one of the Gospels, the Book of Revelation, and three letters.

All these profound and beautiful words come from a simple fisherman of Galilee. More than that we recall John as one of Jesus’ dearest friends during the years of His ministry. And while the other Apostles stayed in hiding on the day Christ suffered and died, John accompanied the Blessed Virgin Mary and several faithful women to stand at the foot of His cross. Then, three days later, Mary Magdalene rushed to tell Peter and John that Christ was no longer in the tomb. “They both ran, but the other disciple ran faster than Peter and arrived at the tomb first; he bent down and saw the burial cloths there, but did not go in.… Then the other disciple also went in, the one who had arrived at the tomb first, and he saw and believed” (John 20:4-5, 8). John stayed back to allow Peter, chosen by Christ to head His Church, to enter first. Yet it was John who knew Jesus’ loving heart so well that he immediately grasped the truth. John realized that all that Christ had promised had been fulfilled and that He had indeed risen from the dead.

Like his fellow disciples, John went out to preach the forgiveness of sin and the mercy of God to all who would listen. His contribution to the New Testament continues to teach and inspire each generation about the essence of Christ’s message: love. St. John is believed to be the only one of the Twelve not to have experienced a martyr’s death. Instead, he probably died in Ephesus, Turkey, around the year 100 A.D.

Suggested missionary action: We can ask St. John to help us make a daily habit of reading Holy Scripture and so grow ever closer to Christ our Lord. We can also seek his guidance in appreciating and sharing God’s love.