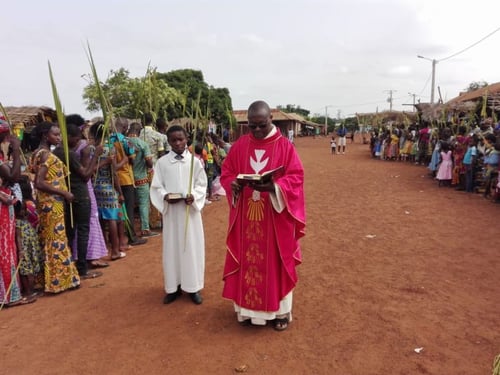 On this feast of SS. Philip and James, we celebrate the devotion of two of Christ’s beloved Apostles.

The Scriptures refer to Philip a few times and we know that he was from the same Galilean town as Peter and Andrew, and probably a friend as well as a fellow fisherman. James the Lesser is barely mentioned in the Gospels. Yet we know that they were called by Jesus and traveled with Him during His public ministry, witnessing His miracles and hearing His words of forgiveness and mercy. Like the others, except for John, they failed to stay with Christ during His Passion. Still, after our Savior rose from the dead, He returned to share His peace and love with the Apostles. And they spent the rest of their lives spreading the Good News. “Amen, Amen I say to you, whoever believes in Me will do the works that I do, and will do greater ones than these, because I am going to the Father. And whatever you ask in My name, I will do” (John 14:12-13).

After years of preaching and building the early Christian community, Philip and James were martyred. In time, their remains were brought to Rome where they are still interred together at the Church of the Twelve Holy Apostles.

Suggested missionary action: Let us say a World Mission Rosary to honor the feast of these faithful Apostles of Jesus. Let us ask our Lord to bless all missionaries around the world.