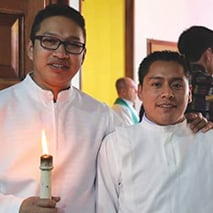 Peter and Paul lived out their faith in Christ, building up His Church

We can honor Saints Peter and Paul and help today’s missionaries.

On this Solemnity of Saints Peter and Paul, we remember the two people most directly responsible for the direction and growth of the Church following the death, Resurrection and Ascension of Jesus. Jesus met Peter, then known as Simon, on the shore of the Sea of Galilee and invited him to become a fisher of men. This simple man was capable of faith and doubt, of loyalty and betrayal, of vain foolishness and humble wisdom. But despite his flaws, it was Peter who became the first Pope, the Vicar of Christ and shepherd of His flock. Peter was entrusted with the leadership and welfare of the Church in its earliest days. He left Jerusalem to spread the Good News and made his way to Rome where he lay down his life for his beloved Lord about 64 A.D. St. Peter died on the cross, but head down at his own request, feeling unworthy to be crucified in the same manner as Jesus.

St. Paul’s story is quite different. His original name was Saul, and he came from Tarsus, in present-day Turkey, and earned his livelihood making tents. Paul was both a Jewish Pharisee and a Roman citizen. He took his religion seriously and, when he saw the growing number of Christian converts from Judaism, he responded by actively persecuting them. While on his way to the city of Damascus in pursuing these efforts, he heard Christ’s voice and everything changed for him. Paul dedicated himself to drawing more and more people to his newfound faith. He became the most important missionary the Church has ever known and had particular interest in welcoming Gentiles. He also wrote a number of letters that are included in the New Testament and have been a major influence on Christian thought over the millennia. He endured many hardships in his ministry, but was able to say: “I have kept the faith. From now on the crown of righteousness awaits me, which the Lord, the just judge, will award to me on that day, and not only to me, but to all who have longed for His appearance” (2 Timothy 4:7-8). Paul was martyred in Rome about 67 A.D.

Suggested missionary action: We can honor Saints Peter and Paul and help today’s missionaries who share the word of God with others by praying for them and by supporting the work of the Pontifical Mission Societies.