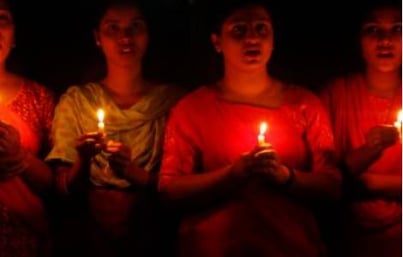 Today we understand that the souls in heaven include both the relatively small number of saints officially named by Church and the many who have loyally and lovingly served the Lord and His people during their earthly lives.

On All Saints Day we remember and revere all of God’s people who are in heaven. In the early centuries of Christianity, the martyrs who gave up their lives for their belief in our Savior were given this title. However, over time, as most persecutions ended and the Church became accepted, people who had demonstrated lives of heroic virtue in imitating Jesus were also recognized as saints. In the seventh century, Pope Boniface IV had bones of Christians that had been buried in the catacombs of Rome reinterred. They were placed at the site of a famous temple called the Pantheon that had been presented to him by the Roman emperor.  It was converted into a church that was consecrated and named for the Blessed Virgin and All Saints.  A century later, a chapel in honor of All Saints was dedicated in St. Peter’s and a feast day was named. In time, it was celebrated universally.  The first papal canonization took place in 993. Before that saints were usually declared by general acclamation with the approval of the local bishop. Today we understand that the souls in heaven include both the relatively small number of saints officially named by Church and the many who have loyally and lovingly served the Lord and His people during their earthly lives.

In the liturgy for this holy day, we hear St. John tell us, “I had a vision of a great multitude, which no one could count, from every nation, race, people, and tongue. They stood before the throne and before the Lamb, wearing white robes and holding palm branches in their hands. They cried out in a loud voice: ‘Salvation comes from our God, who is seated on the throne, and from the Lamb.’” (Revelation 7:9-10) Almighty God has always wanted His children to know the joy and triumph of eternal life with Him. Today we rejoice with those who are already experiencing this everlasting gift – and look forward to our own entry into glory.

Suggested missionary action:  As we honor all our brothers and sisters in the heavenly Kingdom, we can ask them to help us imitate their dedication to the Lord our God and to care for our neighbors, so that we, too, will join them when He calls us home.