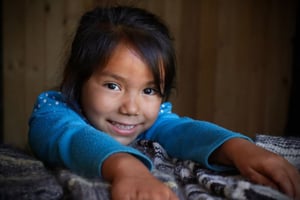 Today, we recall God’s words about His Son….

Jesus also needed His followers to ultimately understand that He was the Son of God come to rescue their immortal souls.

Jesus spent years with His Apostles teaching them about the love and mercy God has for His people, each and every one. Christ wanted them to know that He spoke the truth about the Father and about Himself. Through His message and His miracles, through the beauty of His goodness and compassion, He revealed Himself as the long-awaited Messiah. But Jesus also needed His followers to ultimately understand that He was the Son of God come to rescue their immortal souls. He would do this by laying down His life. But at the time of the Transfiguration, the disciples were still trying to grasp who and what Jesus was. And now He is going to help them. Taking Peter, James, and John with Him, they climbed a mountain and suddenly Christ is transfigured, bright with light. And speaking with Him are the prophet Elijah and the lawgiver Moses. The Apostles are overwhelmed, even terrified, by the glory of our Lord. Perhaps thinking that they must do something in this special moment rather than just experiencing it humbly and gratefully, Peter talks about making tents. But it is God who is in charge. “Then a cloud came, casting a shadow over them. From the cloud came a voice, ‘This is My beloved Son. Listen to Him.’ Suddenly, looking around, they no longer saw anyone but Jesus alone with them” (Mark 9:7-8).

On the way down, Christ tells them not to speak of this event until “the Son of Man had risen from the dead” (Mark 9:9). They do not understand what this means either, but that does not stop the men from talking about it among themselves. After the divinity of Christ has been shown to them, it is probably natural that they show themselves to be so very human. It is likely that we would do the same. Yet in the not-too-distant-future, Peter, James and John would be confronted with the arrest, torture, and crucifixion of Jesus. And Peter would even deny Jesus. But he would also repent and embrace His mercy. Something Christ will also give us if we ask Him.

Suggested missionary action: Let us ask Jesus each day to help us truly listen to Him and do what He asks of us. We can remember during the solemn days of Lent that the glory of the transfigured Christ will be manifested in the Resurrection.