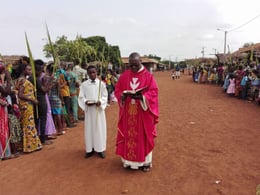 On this day we know as Palm Sunday, people were watching and waiting to see what would happen next...

But Christ understood that the time had come for His own ministry to end. He would soon be betrayed and arrested, tried and tortured, nailed to a cross and sealed in a tomb.

Each of the four Gospel narratives recounts the triumphal entry of Jesus into Jerusalem in the days before His arrest and suffering that end in His death. It was an unusual event because Jesus rode into the city on a donkey and He was recognized and honored along the way. “Many people spread their cloaks on the road, and others spread leafy branches that they had cut from the fields. Those preceding Him as well as those following kept crying out: ‘Hosanna! Blessed is He who comes in the name of the Lord! Blessed is the kingdom of our father David that is to come! Hosanna in the highest!’” (Mark 11:8-10). It has become tradition for Catholics to celebrate Palm Sunday with a procession and the carrying of palm branches whenever possible. But with or without these symbols, every year we hear the Passion story and how Jesus and His disciples joined many others going into Jerusalem to celebrate the Passover feast.

Those in that crowd or already in the city could not know what would soon happen to the young rabbi from Nazareth. He was becoming well known for His preaching about the mercy of God and the Kingdom of Heaven; and that people need to turn away from selfishness and sin and to love God and their neighbors. More than that, word was spreading about the great healings and other miracles He had performed. Many people were anxious to see and hear Him. But Christ understood that the time had come for His own ministry to end. He would soon be betrayed and arrested, tried and tortured, nailed to a cross and sealed in a tomb. But then the Son of God would rise and return so that many of His followers would see that He had truly triumphed over death. But on this day we know as Palm or Passion Sunday, people were simply watching and waiting to see what would happen next.

Suggested missionary action: As we start Holy Week, we can resolve to do an extra act of kindness, to offer alms to help a person in need or a charitable organization, and to read an excerpt from the Gospels each day. We can make a special effort to contemplate the sacrifice our Lord made for us.