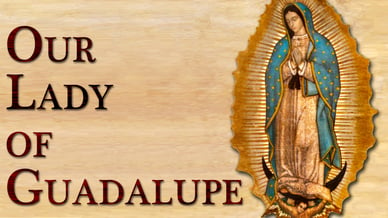 Thanking God for the gift of His mother to the whole world...

In the 16th century, a beautiful young woman appeared to a 57-year-old widower on his way to Mass in what is now part of Mexico City.

The man was an Aztec, a Christian convert, and like most of his people, quite poor. In both appearance and clothing, the lady looked like an Aztec princess and talked to this man, Juan Diego, in the Nahuatl tongue of his people. She revealed that she was, “Holy Mary, Mother of the True God for whom we live.” She directed him to tell the local bishop to have a chapel constructed right on the spot. When the Bishop told Juan Diego to demand a sign of the lady to prove that was truly the Blessed Virgin, she offered two. The first was a bouquet of roses that should have been impossible in that cold December. And then the one the miracle can still be seen today: her image on Juan Diego’s cape. “Blessed are you, daughter, by the Most High God.… Your deed of hope will never be forgotten by those who tell of the might of God” (Judith 13:18, 19).

Almost 500 years later, this miraculous image of Our Lady of Guadalupe is still on display at the Basilica of Guadalupe. After Mary’s appearance, millions of Azteca and other native people became Christians. Though poor and powerless in the eyes of the world, the visit of the Mother of God reassured them that they were beloved by their Creator.

Suggested missionary action:  We can pray the World Mission Rosary to the Blessed Virgin Mary, asking her to care for the spiritual and physical well being of missionaries and all the men, women and children they serve around the world.