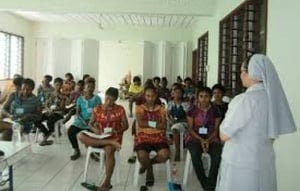 Peter Claver spoke about Christ to those who had probably never heard of Him, showing them the respect and mercy they had been denied.

St. Peter Claver was a Spanish Jesuit priest who considered himself the slave of the slaves to whom he ministered. Ordained in 1615 in Cartagena, the major slave trading port in what is now Colombia, he proceeded to exert his efforts on behalf of the African people forced into slavery and brought by the thousands to work the plantations and mines. He greeted them as their ships docked, offering them something to eat and drink, and caring for those who were sick or injured after the long brutal voyage. Through interpreters, Peter Claver spoke about Christ to those who had probably never heard of Him, showing them the respect and mercy they had been denied. He said, “We must speak to them with our hands by giving, before we try to speak to them with our lips.” He frequently journeyed around the country to look after their bodies and souls, and made a point of staying in the slave quarters, rather than the houses of the slave owners. He also spent time visiting hospitals and prisons and preaching to wealthy people, sailors and traders – anyone and everyone whom he could touch with Jesus’ message of love and mercy for all, especially those in greatest need.

He was able to have some influence on helping those he served and became known as the Apostle of Cartagena. In 1654, at age 74, St. Peter Claver died following a long sickness, during which he was ignored by almost everyone. He believed that “man’s salvation and perfection consists of doing the will of God which he must have in view in all things, and at every moment of his life.” Today, he is the patron saint of interracial justice.

Suggested missionary action:  We can pray to St. Peter Claver to petition his guidance for our efforts to help all who suffer from discrimination and prejudice – and to assist us in loving and respecting all of God’s beloved children the way He wants.