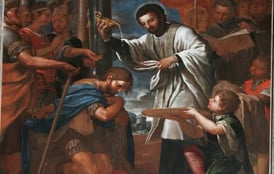 Remembering the life and work of the great missionary St. Francis Xavier

St. Francis Xavier and St. Thérèse of Lisieux were both named patrons of the Church’s missions.

On this feast celebrating the life of St. Francis Xavier we recognize someone who was not only an incredible missionary, but also one who loved and respected all he met. He was a member of a Spanish noble family and had expectations of a successful life and career. Studying and then teaching in Paris, he met St. Ignatius Loyola who would change his outlook by challenging his personal beliefs and worldly expectations. Francis joined Ignatius and several others in establishing the Society of Jesus (better known as the Jesuits). Ordained in 1537, Francis became the first of the order’s many great missionaries. He communicated the word of God to the people of India, areas of Southeast Asia, and Japan. He was a humble man of great energy and love for all God’s children, especially those in greatest need. He converted many people on his travels. In 1552, Francis Xavier planned to bring the Gospel to China, but on the way he became sick and died at the age of 46 before ever reaching the mainland. He and St. Ignatius Loyola were canonized at the same time in 1622. In 1925, St. Francis Xavier and St. Thérèse of Lisieux were both named patrons of the Church’s missions.

In a letter to a fellow Jesuit, he wrote a beautiful message that is appropriate for both missionaries who travel the world, and those who of us who serve closer to home: “May God our Lord, grant us in time the gift to perceive His holy will. He wishes that we should always be ready to fulfill it whenever He manifests it to us and lets us feel it within our souls. To fare well in this life, we must be pilgrims, ready to go wherever we can serve God our Lord the more.”

Suggested missionary action: We can ask St. Francis Xavier, patron of missions, to assist all those men and women who bring the Gospel message to others. We can also support the work of the Church’s missions around the world through both our financial gifts and ongoing prayer.

Add #justonemore to your gift-giving list this Christmas with MISSIO.