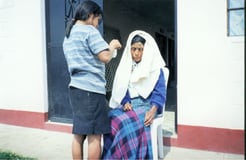 As a true missionary, Mother Cabrini was deeply concerned for both the material and spiritual well-being of all, especially those in need or trouble.

St. Frances Xavier Cabrini, was born to a large family in a town about twenty miles from Milan, Italy, in 1850. After the death of her parents, she tried to enter the order of religious sisters that had educated her. They did not believe that she was physically capable of the work, so she became headmistress of an orphanage. In time, she gathered other young women around her who wanted to consecrate themselves to Christ and founded the Religious Sisters of the Sacred Heart. On the advice of the pope, Mother Cabrini focused their missionary plans on the United States, starting with New York where she opened a home for orphans. She went on to found a variety of institutes to provide for the health, education, and welfare of both children and adults, particularly among large numbers of new immigrants to the United States. She also supervised the development of such establishments in South and Central America.

As a true missionary, Mother Cabrini was deeply concerned for both the material and spiritual well-being of all, especially those in need or trouble. She said, “Did a Magdalene, a Paul, a Constantine, an Augustine become mountains of ice after their conversion? Quite the contrary. We should never have had these prodigies of conversion and marvelous holiness if they had not changed the flames of human passion into volcanoes of immense love of God.” This lovely quote gives no hint of the great difficulties she faced in addressing the problems of so many people in so many different places. Yet she persevered in order to serve our Lord and His precious people of all ages and backgrounds. She was naturalized as a U.S. citizen in 1901. She died in Chicago in 1917 and recognized by the Church as a saint in 1946.

Suggested missionary action: On this day commemorating St. Frances Xavier Cabrini who served immigrants throughout North and South America, let us say a World Mission Rosary. We can ask her to intercede on behalf of immigrants, missionaries, and all who are in need.