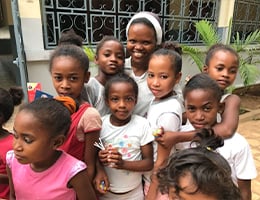 Mother Seton experienced many sufferings during her life including personal sickness and the deaths of her husband and two children. But she gave herself totally to Christ, particularly in the Blessed Sacrament.

St Elizabeth Ann Seton knew what it was like to come from an affluent and socially important family. But she would eventually know what is was like to be poor and shunned for her faith. Elizabeth was born in New York City shortly before the start of the American Revolution. In 1794 she married William Seton and they soon had five children. His business efforts began to collapse and he also endured tuberculosis for several years. Seeking an improvement in his health, the couple journeyed to Italy where he died. While there Elizabeth found great hope and peace through the Catholic Church, which she embraced on her return to New York. Unable to provide for her family with the school she opened because of the anti-Catholicism of the period, she took the advice of a priest and went to Maryland. There she cared for her children, started her school and, in 1809, founded the Sisters of Charity – the first American order of religious women. Mother Seton sought God’s will in all things. “His commandment is this: we should believe in the name of His Son, Jesus Christ, and love one another just as he commanded us. Those who keep His commandments remain in Him, and He in them” (1 John 3:23-24).

Mother Seton experienced many sufferings during her life including personal sickness and the deaths of her husband and two children. But she gave herself totally to Christ, particularly in the Blessed Sacrament. She began many schools and orphanages and otherwise brought God’s mercy to those in trouble and in need. With her many accomplishments, she always aimed on offering our Lord a grateful and gentle heart. She believed that, “The gate of heaven is very low; only the humble can enter it.” Canonized in 1975, St. Elizabeth Ann Seton was the first person born in what would become the United States of America to receive this honor. We also revere her as the patron of Catholic schools.

Suggested missionary action: We can ask St. Elizabeth Seton to pray for our families. We can also ask her guidance in reaching out with a helping hand to assist others, in education especially, in our neighborhood and around the world.