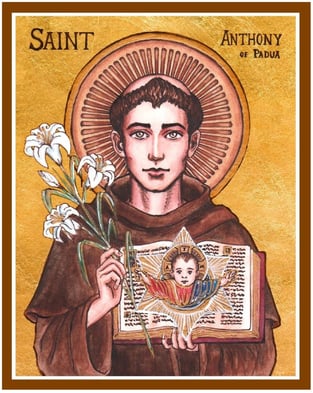 Whatever Anthony did was in the service of God and His people...

On this feast of St. Anthony of Padua we commemorate the life of a humble servant of the Lord and His people who gained great fame. He had hoped to die a martyr for Christ, but became a teacher and preacher for Him instead. Part of a rich family in Lisbon, Portugal, he became devoted to the poor and sick. Whatever Anthony did was in the service of God and His people. He received ordination as an Augustinian Canon, but joined the Franciscans, hoping to become a missionary. When poor health prevented this, he worked in obscurity until he was asked to preach a sermon. His great speaking skills and knowledge of Scripture brought him to the attention of superiors and St. Francis of Assisi chose him to teach theology to his fellow friars. After this, Anthony traveled France, Spain and Italy to speak out against heretics and encourage people to lead faithful lives of loving devotion to God – and care for one another. He said, “The breadth of charity widens the narrow heart of the sinner.”

St. Anthony was known for several miracles, including the appearance thousands of fish that came to the surface off the coast of Rimini, Italy, to hear him preach when the people of the town ignored him. Another occasion may seem less wondrous, but is no less important, and it resulted in his becoming the patron of lost items. A young man studying to become a Franciscan decided to leave the order and took Anthony’s book of Psalms with him. This would have been irreplaceable to the saint, but he simply prayed for its recovery. The man returned it – and then stayed to fulfill his vocation as a friar. “I bless the Lord who counsels me; even in the night my heart exhorts me. I set the Lord every before me; with Him at my right hand I shall not be disturbed” (Psalm16:7-8). St. Anthony also wrote a beautiful book of sermons to assist other priests. He died in 1231 when he was 35. And was proclaimed a saint only a year later. He was named a Doctor of the Church in 1946 and is known as the “Evangelical Doctor”.

Suggested missionary action:  Let us pray to St. Anthony to assist us in turning our lives over the Lord and in seeking to do always and only what God asks of us each day. Let us ask him to help us find our way.