Holy Saturday at the Easter Vigil in the Holy Night of Easter ~ April 16, 2022 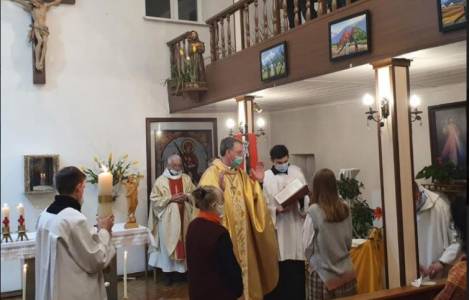 The sadness and suffering of Calvary is left behind...

The mission of the Son of God is fulfilled! Through the Resurrection of our Lord, His beloved people have been saved for all eternity.

At Christmas we heard an angel proclaim the birth of the Savior to poor, humble shepherds tending their flocks and the heavenly host majestically revered God’s unfathomable glory. On this Easter Vigil venerating that same Savior, we meet two angels who quietly announce His Resurrection to some brave, faithful women who came to tend lovingly to His broken body that had been hastily laid in its burial place after His torture and death. “The women who had come from Galilee with Jesus took the spices they had prepared and went to the tomb. … Two men in dazzling garments appeared to them. They said to them, ‘Why do you seek the living one among the dead? He is not here but has been raised. Remember what He said to you while He was still in Galilee, that the Son of Man must be handed over to sinners and be crucified, and rise on the third day.’ And they remembered His words” (Luke 24:1,4,5-8).

Holy Saturday which began with such stillness and loss after the death of our Lord on Good Friday, is ready to reveal all that He meant when He told His followers that He would rise again. Many who heard Jesus were probably still so shocked at the idea of His crucifixion, they could not grasp the idea of His Resurrection. While they had heard about or may even have witnessed how He raised Lazarus and others from death, it must still have been almost impossible for them to believe. But the women who went to the tomb to perform an act of mercy for their dead Master, now hurried to tell the Apostles that everything He had told them was true. He really was the Christ, the Messiah, the Son of God. Death had no hold over Him; and neither did sin. Very soon, Jesus would show Himself to other followers. And they would start to realize that the world they knew had changed forever. Happy Easter! Alleluia!

Suggested missionary action:  Let us thank God for the glory of Easter by joyfully sharing His mercy with others. Through our prayer, words, and example, we can reveal His goodness and generosity to all we meet today and every day.