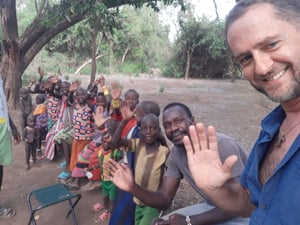 The Son of God... the light of the world

It must have been a bitter disappointment to Martha and Mary when Jesus did not immediately rush to heal their ill brother Lazarus. After all, they were good friends. Jesus stayed at their home and they certainly knew about and had probably seen His miracles when He cured those who were blind, could not walk or suffered in so many ways. Yet He wanted this family and all their neighbors who had gathered together to see God’s glory in a special way. At the tomb of Lazarus, He told them to move the stone away from the entrance. “Jesus raised His eyes and said, ‘Father, I thank You for hearing Me. I know that You always hear Me; but because of the crowd here I have said this, that they may believe that You sent Me.’ And when He had said this, He cried out in a loud voice, ‘Lazarus, come out!’ The dead man came out” (John 11:41-44).

Jesus the carpenter of Nazareth was the Son of God. He wanted people to appreciate that all He said and did was the Father’s plan for their salvation. After Jesus restored Lazarus to life, the Jewish leaders become more determined than ever to destroy this iterant preacher who caused them so much trouble because He was truly the Messiah, the Christ, although they would not believe it. Soon Jesus continued on His way to Jerusalem. Soon He would celebrate His last Passover feast, His last supper with His Apostles. Soon He would be arrested, tortured and crucified. And soon after that He would rise from the dead just as He had promised. There would be another empty tomb. And when He left it in glory on Easter morning, He would take us with Him. Jesus Christ had triumphed over death and sin and saved us for eternity, saved us for Himself.

Suggested missionary action:   Let us not be afraid to use the final days of this Lenten season to contemplate our own life, as well as our death, and resurrection to eternal life. Let us thank Jesus for dying for each one of us so that we may share all eternity with Him.