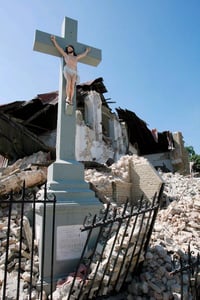 He came to save the world’s people of every generation for life eternal.

For Catholics and other Christians around the globe, the cross is a symbol of our belief in Jesus, our Savior. Because He died by means of this cruel form of execution, it represents the sacrifice of Christ the Son of God and Son of Man. He came to save the world’s people of every generation for life eternal. As St. Paul tells us, “Christ Jesus, though He was in the form of God, did not regard equality with God something to be grasped. Rather, He emptied Himself, taking the form of a slave, coming in human likeness; and found human in appearance, he humbled Himself, becoming obedient to death, even death on a cross” (Philippians 2:6-8).

Today we exalt the cross that bore the body of our Lord that hung upon it for three hours. His hands and feet were nailed into the wooden beams that became stained with His blood. After Jesus’ crucifixion, the cross itself was thrown away, perhaps deliberately hidden, until St. Helena led an expedition at the behest of her son, the Roman Emperor Constantine, to rediscover it. When she succeeded, a church was built on the site of the crucifixion and of the burial of Jesus, now called the Basilica of the Holy Sepulcher. Christ, the King of the Universe, was mocked by Roman soldiers who scourged Him and pushed a crown of thorns into His head. The crowds, too, who gathered to watch Him die under a sign that read “King of the Jews.” That cross was His only throne on earth as well as the altar of His sacrifice. And we now venerate it for the part in played in God’s design for our salvation. So the next time we make the Sign of the Cross, let us stop to really think about Christ Crucified.

Suggested missionary action:  We can spend some quiet time contemplating a crucifix and reading one of the Gospel accounts of Jesus Christ’s passion and death. We can also contemplate the lives of those in need and see how we can help them bear their own crosses.