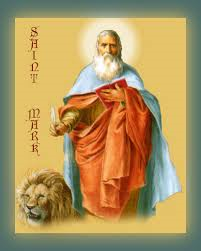 ‘Go into the whole world and proclaim the Gospel to every creature. Whoever believes and is baptized will be saved.’

St. Mark wrote the shortest of the Gospels, yet because it was written first, between 60 and 70 A.D., it exerted a strong influence on the versions authored by Matthew and Luke. Many believe that Mark is the unnamed young man present at the arrest of Jesus who, when some in the crowd tried to grab him, left his clothes behind as he fled naked. Mark’s mother had a house in Jerusalem that in the earliest days of Christianity was open to believers. And it was to her home that Peter went after he was miraculously freed from prison. Certainly, Mark travelled and preached with SS. Peter, Paul and Barnabas.

His Gospel contains no information about the birth and childhood of Jesus. Instead it begins with St. John the Baptist preparing the way for Christ. The image of a lion has been used in art through the centuries as the symbol of Mark. It is believed that comes from the first words of John crying out in the desert that were likened to the roaring of a lion. The original ending of this Gospel is at the empty tomb of Jesus where an angel tells three amazed women disciples who came to tend to His body that He has been raised. They are assured that they will see Him again, just as He had said. However, a longer version was added to describe the commissioning of the Apostles and the Ascension of Christ. “Jesus appeared to the Eleven and said to them: ‘Go into the whole world and proclaim the Gospel to every creature. Whoever believes and is baptized will be saved.’… Then the Lord…was taken up into heaven.… They went forth and preached everywhere, while the Lord worked with them ” (Mark 16:15, 19-20). St. Mark is considered a martyr, having served as the founder of the Christian community in Alexandria where he died for his faith in our Lord.

Suggested missionary action:  We can pray to St. Mark, asking him to help us develop a greater appreciation of the Gospels, as we nurture our spirit and hearts in these challenging days.