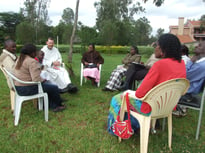 This feast day honors St. John the Apostle for his life spent not only in spreading the Good News of salvation through Jesus Christ, but...

also in teaching about the incomparable depth of His love for us.

Jesus chose the fisherman St. John and his brother St. James to become His disciples early in His public ministry. They both became very close to Him and along with St. Peter were present at several miraculous events, including the Transfiguration and the raising of Jairus’s daughter from the dead. These three Apostles who were especially close to Christ, were also with Him during His agony in the Garden of Gethsemane on the night before He was crucified. However, John was the only Apostle to only stand with the Blessed Virgin Mary at the foot of our Savior’s cross as He suffered and died. Then, like the other Apostles, he waited. But on that Sunday morning, St. Mary Magdalene went to the tomb where Jesus’ body had been laid, only to find that the stone had been rolled away from the entrance. “(She) ran and went to Simon Peter and to the other disciple whom Jesus loved, and told them, ‘They have taken the Lord from the tomb, and we do not know where they put Him.’ So Peter and the other disciple went out and came to the tomb. … When Simon Peter arrived after (the other disciple), he went into the tomb and saw the burial cloths there. … Then the other disciple also went in, the one who had arrived at the tomb first, and he saw and believed” (John 20: 2-3,6,8). Peter and John saw the same empty tomb, but it was John who not only saw but understood what the absence of Christ’s body really meant. He had not been taken away by others, rather, He had defeated death and risen -- just as He had told His disciples that He would.

John saw with the eyes of love and so he believed -- not only in the Resurrection, but also in everything Jesus had ever said and promised. Soon Mary Magdalene, then John and the other Apostles, and many disciples would see Jesus again. And they would go on to follow Him by sharing His word and His mercy with others. St. John is believed to have lived to an old age, always sharing the beautiful faith he found in that empty tomb.

Suggested missionary action:   Let us ask St. John for his help in emulating his personal relationship with the Blessed Virgin Mary. Jesus entrusted them to one another from the cross. Let us draw closer to Mother of God so that, though her care we, too, may grow nearer and dearer to her Son, Christ our Savior.