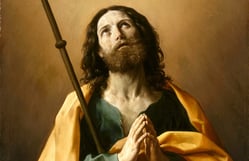 St. James, known as the Greater, accompanied Jesus for some significant experiences shared only with his brother St. John and with St. Peter

By tradition, St. James is thought to have journeyed to Spain as a missionary...

St. James the Greater was his brother St. John were the sons of Zebedee. They were also fishermen and neighbors of St. Peter and his brother St. Andrew. These were called by Jesus very early in His ministry to become Apostles. Like the others, James was imperfect. And, like John, he could be proud, angry, and presumptuous. Nevertheless, our Lord was especially close to him, John, and Peter. In addition to being witnesses to several miracles that the other Apostles were not, these three were also called to pray with Christ in the Garden of Gethsemane on the night before He died. After the coming of the Holy Spirit at Pentecost, James shared the message of salvation first to the Jews and then to the Gentiles. In the first reading today, we hear what St. Paul, who was called by Christ to believe in Him and to share that faith with others, had to say about the importance of evangelization. Jesus had entrusted His Apostles and all disciples to bring others to Him. “We have the same spirit of faith, according to what is written, I believed, therefore I spoke, we too believe and therefore speak, knowing that the one who raised the Lord Jesus will raise us also with Jesus and place us with you in His presence. Everything indeed is for you, so that the grace bestowed in abundance on more and more people may cause the thanksgiving to overflow for the glory of God” (2 Corinthians 4:13-15).

By tradition, St. James is thought to have journeyed to Spain as a missionary. However, Scriptures tells us that around 44 A.D., he died a martyr’s death by beheading in Jerusalem, the first among the Apostles to be killed for Christ. His remains are believed to have been transported to back to Spain and are located in the Cathedral of Santiago de Compostela. In the Middle Ages, this became a place of pilgrimage. Along with Rome and Jerusalem, it was called one of the three great places of Christian pilgrimage in the middle ages. Even today, the Camino de Santiago or Way of St. James remains popular. It is not only a destination, but a personal challenge, since many people travel there on foot, sometimes as an act of penance. It seems appropriate that St. James is a patron of pilgrims.

Suggested missionary action:  Let us pray to St. James for his guidance in our own pilgrimage through life. We can seek his assistance in remaining faithful to Christ and embracing whatever He asks of us every day.