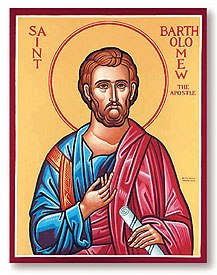 Let us honor and imitate St. Bartholomew by being honest and honorable

While we do not know it from the Scriptures, tradition tells us that St. Bartholomew went to India where, in the 3rd century, another missionary found traces of the Christian faith left by him.

Today we celebrate St. Bartholomew, also called Nathanael. In the Gospel according to St. John, we hear about Jesus’ picking twelve men who would accompany Him as His closest disciples, the Apostles. “Jesus saw Nathanael coming toward Him and said of him, ‘Here is a true child of Israel. There is no duplicity in him.’ Nathanael said to him, ‘How do You know me?’ Jesus answered, ‘Before Philip called you, I saw you under the fig tree’” (John 1:47-48). We have no idea what Bartholomew was doing under the fig tree – praying, studying, sleeping? What matters is that Jesus recognized a person who would be one of His own. One who would follow where He led, who would listen and learn. Like his fellow Apostles, Bartholomew would run away at Christ’s arrest. But he would return, and, in time, he would leave behind the world he knew to bring the name of Jesus and His words of salvation to people hungry for hope.

While we do not know it from the Scriptures, tradition tells us that St. Bartholomew went to India where, in the 3rd century, another missionary found traces of the Christian faith left by him. It is also believed he journeyed to Armenia where, like most of the other Apostles, he died a martyr’s death. Let us make an effort to lead lives of integrity and fidelity, serving the Lord all our days, just as St. Bartholomew did.

Suggested missionary action:  Let us ask St. Bartholomew to help us be as faithful and honest as he was. Let us follow our Lord and do what He asks of us, just as St. Bartholomew and the other Apostles did as they shared the message of Christ far and wide.