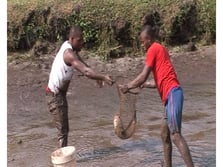 St. Andrew, one of the best known of Christ’s Apostles, became “a fisher of men” at His call to join Him and to walk in His footsteps. He followed our Lord all the way to death on his own cross.

According to general belief, St. Andrew shared the word of Christ with the people of what is modern-day Turkey and Greece.

Today’s feast commemorates St. Andrew who was called, along with his brother St. Peter and their neighbors Ss. John and James, to join Jesus as His followers and, ultimately, His Apostles. Fishermen all, they completely changed their way of life to be with Him. St. Andrew and the others also had the remarkable gift of spending years in His company. They heard Him proclaim His message of salvation and saw Him perform incredible miracles. During those three years, Christ was readying them to preach the Good News to the world, to build His Church. Just as we learn from the First Reading today, the Apostles came to believe, like all Christians, that Jesus was not only the Messiah or the Redeemer of all, but also the Son of God. “If you confess with your mouth that Jesus is Lord and believe in your heart that God raised Him from the dead, you will be saved. For one believes with the heart and so is justified, and one confesses with the mouth and so is saved. … Thus faith comes from what is heard, and what is heard comes through the word of Christ” (Romans 10:9-10,17).

According to general belief, St. Andrew shared the word of Christ with the people of what is modern-day Turkey and Greece. It was mainly with them that he indeed became a fisher of men, just as Jesus had said. And it was in the city of Patras that he was eventually executed: crucified on an X-shaped cross that is now commonly called St. Andrew’s Cross. St. Andrew’s relics are believed to have been taken to different locations over the years, including some enshrined at St. Peter’s Basilica. In 1964, Pope St. Paul VI had those remains returned to the Greek Orthodox Church in Patras as a gesture of goodwill.

Suggested missionary action:  Let us ask St. Andrew to intercede for the Church’s missionaries and everyone they serve. We can also ask him to help all those who spread Jesus Christ’s message of salvation around the world. This includes each of us when we make an effort to show Him to others through our daily words and example.