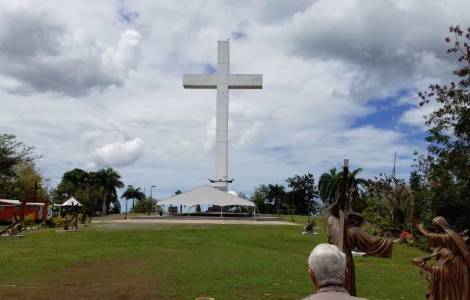 See despair turned to hope, and death turned to life...

In the Gospel for this feast commemorating the Exaltation of the Holy Cross, Jesus reminded Nicodemus and His other followers about an incident in the life of Moses.

Snakes bit many Jews who were with Moses in the desert after their exodus from Egypt. So God instructed him to put the image of a snake on a pole. Then anyone who looked up at it would be healed. Jesus wanted His disciples to understand that He, too, would be lifted up and save them from death. However, the Son of God would do far more than spare their mortal lives, He would reclaim them from the consequences of sin and open the gates of heaven for them. “For God so loved the world that He gave His only Son, so that everyone who believes in Him might not perish but have eternal life. For God did not send His Son into the world to condemn the world, but that the world might be saved through Him” (John 3:16-17).

Christ willingly lay down on the altar of the cross and let Himself be raised up on Golgotha for all there to see Him suffer and die. Despite everything He had said and done to prepare the men and women who followed Him, they surely did not understand the ugly horror of Good Friday. Only after He was raised up again from the darkness of the tomb on Easter morning and appeared to them, could they begin to grasp the depths of God’s love for them and all people. The truth of the Crucifixion was revealed in the magnificence of the Resurrection. The bloody cross and the empty tomb illuminate the radiant plans of God – Father, Son, and Holy Spirit – for the future of His people on earth and in eternity. Today, we need to thank God for His profound mercy displayed both on a wooden cross and as well as in the Body of Christ.

Suggested missionary action:  Let us resolve to make the Sign of the Cross with great reverence. And let us be sure that a cross or crucifix has a place of honor in our home.