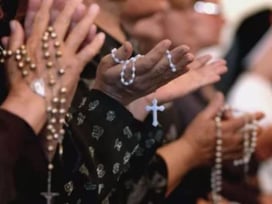 Throughout many mission countries, war and political conflict have been ongoing for decades. During my years working as a lay missionary throughout Africa I have encountered several of these wars and those who have fallen victim to them. In Uganda I spent time working with people suffering from the Luwero war, better known as the Ugandan Civil War; have helped refugees during the Ethiopian Tigray war, and even in one of the most stable nations in Africa, Kenya, witnessed bloodshed during the war between the Kikuyu-Luo. The one thing that each of these wars had in common were the results: the uncountable amounts of death, famine, and disease.

From my experience war does not discriminate against its victims. If you are anywhere in the vicinity, no matter who you are, you are unsafe. I, myself, learned this the hard way as I barely survived one African war. I will always remember. It was the aftermath of a Nigerian presidential election that began this war, and I happened to be on a mission trip in Nigeria at the time of the election results. Early on in my trip, prior to word spreading of just how dangerous it was becoming in the country, I was driving in a car with a priest, and we could see large crowds and riots surrounding us everywhere we looked. I remember closing my eyes so tightly that it made my entire face wrinkle as if I were in pain. I started praying in my head that I would make it to safe grounds and survive. Suddenly, the car we were riding in came to a hault, and Father’s words to me were “There is no way to go back now, we must face them.”

Just recalling this story here for you, I can still feel the chills that overcame my body. It was close to 100 degrees that day, and we were driving in a car without air conditioning, yet my body had never felt colder. My instructions were to stay silent and to let Father deal with the situation. With the sweat pouring off my head and my heart pounding, all that I could do was pray harder than I ever had before. I had all of the faith and confidence in Father that I possibly could. However, even having the utmost amount of faith in God’s plan does not mean that fear is not felt when you’re faced with unexpected situations.

As I sat there alone in the car, watching Father walk towards the group of villagers blocking our pathway, I saw large trucks appear from the distance. As they got closer, I could see that the men in these trucks were holding large military rifles close to them. These trucks were driving so fast through the rough terrains that I could see the dry dust cloud forming in the air around their vehicles. All of a sudden, I realized that these trucks were coming from all directions, and they were beginning to surround our car.

I watched as the men jumped out of their vehicles and began shouting in a language I could not understand. Whether I understood the language or not, one thing was for certain, these men were not happy. Father came running back to the car and said to me “You need to get out.” One man was so close that I could feel the heat from his breath on the back of my neck. I watched as each rifle being held pointed in my direction and yes, I was scared to death – which at the time I thought was quite possibly going to be the outcome of the situation.

The men and Father exchanged words for a brief period with lots of fingers pointing constantly in my direction. Then I saw Father reach into his back pocket, take out his wallet, and begin giving the men money. At the time I didn’t realize quite what was going on, but after much reflection on this horrible situation I realize that Father was quite literally paying for my life. They say that you can’t put a price on life, but after watching someone try to put a price on mine, I beg to differ. Just as quickly as this nightmare began, it was ended. Father thankfully had the necessary funds on his being to match the amount that was requested, and thus we got back into our vehicle and followed the men in their trucks through the large crowd of rioters until we were safely on the other side.

Unfortunately, war is a tradition as old as time. While we may not ever see an end to war in our time here on Earth, there are ways to help those affected. In this moment, the Pope’s mission societies have established a Solidarity Fund for Ukraine. In all moments, you may assist mission Sisters and Brothers, priests, and lay pastoral leaders who, through the Missionary Childhood Association, provide help and hope to children and families in the Pope’s missions, including for those who have been victims of war. Let us pray for the protection of all those currently falling victim to war.

Lord Jesus Christ, who are called the Prince of Peace,
who are Yourself our peace and reconciliation,
who so often said, “Peace to you” – please grant us peace.

Make all men and women witnesses of truth, justice, and brotherly love.

Enlighten our rulers that they may guarantee and defend
the great gift of peace.

May all peoples on the Earth become as brothers and sisters.

May longed-for peace blossom forth and reign always over us all.