It is a very common tradition to fast during Lent, so much so that the day before Lent begins we often stuff ourselves full of goodies that we will be giving up for the Lenten Season. That day before Ash Wednesday is commonly referred to as “Fat Tuesday.” Let me preface this with: I am not a champion “faster”; in all reality I think it’s one of my least favorite things to do. When I go long periods of time without food, I tend to get “hangry.” But “hangry” brings me closer to Jesus’ 40 days in the desert – fasting and praying.

I was fortunate enough to spend time working in the Missions during the Lenten Season, and I found it so incredible to see how that even the most impoverished individuals would still fast and make sacrifices in Jesus’ name. You may wonder how people lacking the necessities to survive, such as water, food, and healthcare are able to sacrifice. I too wondered this. I often thought: How could a person without food give up a meal? Or, how could a person without water give up a drink? And how could a person with quite literally nothing give up anything? Well, they would find a way to give it up to the Lord, and I have been so fortunate to have witnessed these acts of love for Jesus firsthand.

As I assisted the Sisters in serving each child with their must anticipated Easter meal, I remember observing how each one reacted differently. Some dipped their tiny fingers into their bowls and licked the food right off their hands. Some put the bowls right up to their faces, making sure that there was no room to miss a single drop. Then, much to my surprise, there were older children who offered this meal up as their Lenten “sacrifice.” Some would generously pass their bowl down to a younger child and some would request permission to carry their portion home to an adult in the village. Regardless of how they decided to share and sacrifice their meal, I was simply overwhelmed seeing this act of kindness right in front of me.

Truthfully, I wanted to give these children more food so that they didn’t have to make this kind of sacrifice, but the Sisters told me I could not. After all, these children had asked for permission to give their helping of food up to the Lord, and who was I to interfere with that act of true sacrifice? These children loved and trusted in our Lord so much that they were willing to sacrifice their hunger pains and “hangriness.”

In truth, I didn’t know the true meaning of sacrifice until I witnessed this humble and incredible act of kindness firsthand. Each year since, during the Lenten Season, I have tried to understand the strength that it took Jesus to make all of the sacrifices that He has made for us – betrayal, arrest, beating, mock trial, and crucifixion. We are told that He humbly endured this pain for us. Seeing how those children in Africa gave up what may have been their only meal for days offered me a powerful illustration of the strength and sacrifice the Lenten Season is all about.

This Lent, beginning on Ash Wednesday, March 2, you will be presented with the opportunity to make a sacrifice of your own. What will you sacrifice? Will you give up a favorite food or favorite drink? Will you sacrifice ill words and replace them with words of love? Will you give up the time spent on social media and replace it with time talking to our Lord? As you sacrifice, as Jesus did for each of us, remember the children in the Pope’s missions that are making sacrifices too. You are united with them in that sacrifice – and in prayer for one another.

Photo by Martin Jernberg on Unsplash 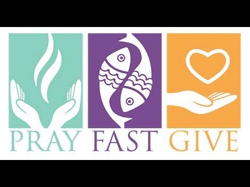 Last year, more than 700,000 children were helped by the Missionary Childhood Association in programs for "protection of life."  This includes health care (basic, rehabilitation, children with disabilities and special needs), advocacy (orphaned children, street children, child soldiers, human trafficking), and outreach (food, water). Consider a sacrifice to the Missionary Childhood Association this Lent to help children in this way. Pray also for the children and the mission priests, religious Sisters and Brothers, and lay pastoral leaders who help them. May your Lenten practices will draw you closer to Christ!