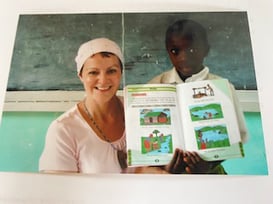 Have you ever seen the Staples® back-to-school commercial? It shows parents joyfully filling their shopping carts with school supplies, gearing up to send their children back to school, while the song “It’s the Most Wonderful Time of the Year” plays in the background. Every time I see this commercial pop up, I have to admit that it does make me chuckle. More importantly though, I think about all of the teachers and school staff who also are preparing to begin a new year. I think, “How difficult it must be for them, now more than ever before!”

I can honestly say that being a school teacher was never a personal calling of mine, but I have had two experiences where I played this role and enjoyed it very much. For a few short years I taught for the CCD religious education program at my local parish, where I was fortunate enough to be in charge of the third-grade class. This was particularly special to me, as this was the year in which my students received the sacraments of First Reconciliation and First Holy Communion. While I had many great experiences throughout that endeavor, I will save those stories for another time. For now, I want to share with you the only other time in my life that I played the role of a school teacher: the time I was a guest teacher in an African classroom.

My time as a teacher in Africa lasted only one week, but wow, five days teaching in a classroom in a another country is a very unique – and stressful! – experience. I was working with a religious order of Sisters in Moshi, Tanzania, near Mt. Kilimanjaro. One of the schools entrusted to the Sisters’ care needed a temporary substitute. I knew that the Sisters were all too busy with their own classes, and they were short staffed at the time. I must say, I was really hoping that they would not ask me because I certainly was not teacher material, let alone teacher material in a classroom an ocean from home! But ask they did.

Although I am fortunate and do not personally suffer from anxiety, when I heard the Sisters’ request, I immediately broke out in a heavier sweat than I already had going. (Just imagine the heat of Africa in summertime, midday, without any form of fans or air conditioning!). I could feel my heart racing, but how could I say no to the Sisters? I pushed past those feelings of doubt and anxiety, tried to smile – with “tried” as the keyword here – and said, “Of course Sister, I would be delighted to fill in and teach!” I still laugh thinking about how much of a white lie that was at the time, but by the end of the week it became true, and I was so happy that I had said yes.

The morning of my first class, I said a prayer to St. John Baptist de la Salle, the patron saint of teachers, and went on my way. Oh, I should probably add that I also said a big thank you to God that the students all spoke English! The week turned out to be more of a five-day long social event. Ever since I was a child, I was bad at following rules and was constantly scolded for my “gift of gab” at inappropriate times, such as in the classroom. Some things never change! Fortunately, the Sisters were lenient, and I did not get in any trouble for going off script. We spent our classroom time together getting to know each other, and sharing stories about our different cultures and traditions. I even got to share with them the story of my life, my missionary calling, and what led me to them.

My week in that classroom flew by faster than any other week, but it turned out to be one of the most memorable experiences I have ever had while on a mission trip. I remember being so sad when I had to say goodbye to the students on my last day, and I remember them expressing how sad they also were that I was leaving. Unfortunately, much worse news was given to these students just as I was about to leave. One of the Sisters came in and announced that the teacher whom I was filling in for would not be returning, as she was sent home to the Lord sometime that week. I like to think that she was watching over me those last few days, smiling down because I was making her students so happy.

To all of the school teachers preparing for a new school year – at home in the United States and half a world away in the Missions – I personally want to dedicate this blog to all of you! Seeing the African students devastated at the news that their teacher was not returning, proved to me just how impactful each and every one of you are to your students. So, I thank you. Thank you for answering your call to become a school teacher. Thank you for dedicating your life to helping our youth to learn and grow. Thank you for your patience, especially during the time of COVID where “classrooms” may look different. Just know that you are making a difference and you are appreciated. I pray that you will all have a blessed, healthy, and happy new school year! 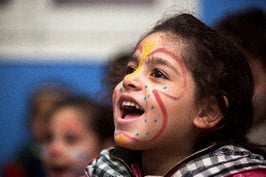 Right now, the Mission Church in Africa, mainly through religious Sisters, is educating more than 19 million young people in close to 45,000 elementary schools. As this new school year starts, join those Sisters ~ and have fun too with an African animal face-painting fundraiser. Ask parents to volunteer who can do the face painting, and charge a few dollars per person for children and adults to get their faces painted. Donate what you collect to the Missionary Childhood Association which supports education in Africa and throughout the Missions. Lions, and tigers, and... lots of fun funds to help children half a world away.