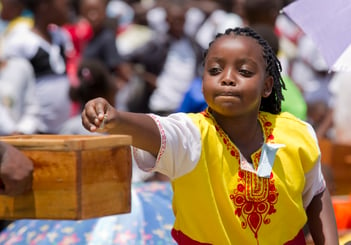 In the past few weeks, I have received numerous phone calls from a priest friend in Philadelphia, Monsignor Vincent Walsh, who has been very supportive of the work I have done in Africa throughout the years. His spiritual support remains a big part of my life. During our recent phone calls, he’s asked me many questions about my conversion and my calling to missionary work. His current goal is to publish a book about my mission adventures. As I was sharing with him, one particular story came to my mind. It was a time that I felt like I was personally witnessing the “poor widow’s mite” (Mark 12:41-44) from the Gospel.

It was a Sunday morning and the last day of that particular mission journey in Nigeria. We were to attend Mass, and following that, there would be a special blessing to honor my visit. Per usual I had to wake up at 5 AM, even though the Mass wasn’t until 8 AM. Due to the poor road conditions we had to leave earlier, making the ride a long, grueling one. It was dark, already hot, and I had no way of knowing what I looked like, considering I didn’t have electricity or even a mirror. I always tried to look at myself in the side mirror of the vehicle, but half of this already small side mirror was missing and every time that I would roll down the window, the dust from the dry, non-paved roads would get on my face and go up my nose, leaving me with the feeling that I had a clay mask on!

This part of Nigeria was very diverse; some people appeared to be well off, and others were living in extreme poverty. Some of the local women wore headdresses that were so large, they appeared to be part of a royal family. Others were lucky to even own one article of clothing. These were the people who counted on the priests and Sisters to provide them with food to survive. After Mass food donated during the collection would be distributed to these children and families in need.

For this particular Mass I was seated next to the altar. It was during the offering that I had this unique experience. As parishioners were approaching the altar with their offerings, one elderly woman approached me and gently put a naira (a penny) at my feet. I found this gesture to be very bizarre, causing me to ponder why she didn’t give this offering to the priests. Being unsure as to what I should do, I smiled and thanked her. Due to the language barrier, I was unsure if she could even understand my expression of gratitude.

After the Mass had ended, we went to visit that same woman at her home, a hut in the local village area. Much to my surprise, I was traveling with a live goat in the back of the car. I didn’t know the goat was there until it let out a loud shriek that startled me beyond belief. The goat was to be an offering to the woman, a widow who did not have children of her own and offered up most of her food to women that had children. The priest that I was traveling with knew of her dire need for food and wanted her to have the goat, knowing that it would sustain her for weeks to come.

Our visit was not short lived. Instead, the woman wanted us to stay for dinner in her home. It would take quite a while before dinner was to be served. The hours that we spent there were filled with conversation between the woman and myself, with the mission priest, Father Obiekwe, translating for us. When dinner was ready, the woman shared with us that she had previously exchanged the food that she had received from the church for medication to bring down her fever. She had to make a decision as to which pain was worse, the pain of hunger or pain from a fever. She felt that she needed to give back to God for giving her the means to access medication. That day at Mass she felt that I was a blessing sent from God, and leaving her only penny at my feet was her way of thanking God for all that He had given to her.

What that woman gave me that day was her “poor widow’s mite.” This led me to believe that I was living out the biblical story firsthand. I later asked Father Obiekwe if I could keep this woman’s offering, and in exchange I would give the church an offering of my own value. He agreed.

To this day, whenever I look at that mite, I think of the valuable lesson that woman had taught me: a lesson of generosity, thankfulness, and love of God. It's a good image to keep in mind as we continue our Lenten journey.

Hearing the cry of the poor... 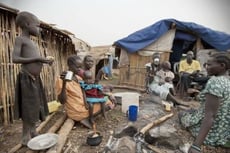 What are you giving up for Lent this year? One article suggested everything from the traditional desserts and candy, to gossip, social media, leaving the lights on, and staying up late. But Lent isn't just about "giving up." The Season is offered to us as a time for renewal. Our renewal becomes concrete when it comes down to self-denial which allows us to live our faith more authentically. Almsgiving is a way for us to express our gratitude and to exercise our generosity to the poor. During Lent we can reflect upon the “cries of the poor.” We reflect on their sufferings of hunger and thirst – and their need to know of the great love and compassion of our Lord. Through MISSIO, you can provide for the poor, to dry their tears, and restore their lives.