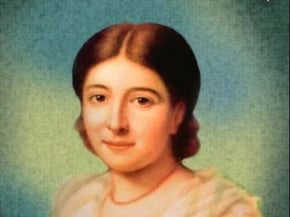 This past month we marked the 200th anniversary of the founding of the Society for the Propagation of the Faith, the first of the Pontifical Mission Societies, as well as the beatification of Pauline Jaricot, whose vision led to the founding of that Pope’s mission society.

From Lyon, France, Pauline Jaricot devoted herself and her life to serving God, the poor, and the sick. Her personal goal was for every baptized person be involved somehow in helping the Missions. She started by organizing small groups of 10 people, with each promising to recite a daily prayer and to pay one penny a week towards helping the Missions – the young U.S. Church included. After one week the 10 in the original group were challenged to create a new group of 10 people, with the same mission focus. This became the Society of the Propagation of the Faith, a sister-society to the Missionary Childhood Association (MCA). In fact, it was a conversation Pauline had with the founder of MCA, Bishop Charles de Forbin-Janson, that led to the start of that Pope’s mission society founded to support programs and outreach for children in the Missions. But that’s another blog!

After spending a great deal of time this month reflecting on Pauline Jaricot and her desire to follow the will of God, I kept thinking of my own mission calling and of the missionaries whom I have met throughout the years of following that call. I kept circling back to one of my mission journeys to Kenya where I was working at an HIV/AIDS orphanage. Due to the ever-expanding HIV/AIDS crisis at the foot of the Ngong Hills, it was the priest’s sole responsibility to run this home where a few hundred orphaned children lived. There was a dire need for volunteers. As far as I knew, I would be the only volunteer there that week. Little did I know, there was a permanent volunteer there who I would get to meet.

Until this trip I had not yet encountered another lay missionary. That is why it was so special to me when I met Hilda for the first time. When I arrived, I began walking through the crowd of children smiling and welcoming me with such excitement. That is when a woman approached me. Wiping her hands on her pants, then extending one out for a firm shake, she introduced herself as Hilda from Germany and immediately asked for my name and about where I was from. I could tell by her tone of voice and the look on her face that Hilda meant business. She was much taller and stronger than me and after introducing myself she glared at me said, “You look weak but I need your help. Go change into pants. No skirts allowed.” Without a doubt this left me with feelings of intimidation, but I knew this was all part of my journey and I meant business too. After all, I was here to help the children, not to be on a vacation making friends.

Well, the expression “don’t judge a book by its cover” could never be more true. It turned out that those few days I spent working with Hilda were some of my most spiritually disciplined days. I came to realize that Hila was actually a very kind woman with a heart bigger than mine will probably ever be. Hilda was quite a bit older than me. She was a recent widow of a man whom she loved dearly and was married to for 40-plus years. During their marriage they would frequently visit Kenya as a vacation destination, and it was during those visits that Hilda felt her calling to serve the poor in Africa.

It wasn’t until the passing of her husband that she decided to leave her home country of Germany and fully commit to the missionary lifestyle. Hilda came to fall in love with this orphanage and the children that lived there, so much so that she bought land directly next to it and built her new home. She told me how she had all her belongings shipped overseas to this new little home in Kenya and how this is where she was planning to spend her life until the Lord called her home to be with her husband again.

It was truly humbling watching Hilda in her element those few days. You could tell she had such a passion and love for each child. I was fortunate enough not only to spend time helping Hilda and experiencing her own joy from her work, but also to pray with her often on her land. We prayed together that more missionaries would be called to help there, and that more lay people would open their hearts and listen for God’s mission call. Looking back now I recognize that I made a friend while helping little ones in need, and what an incredible friend to have!

While Hilda’s story is extraordinary, God calls each of us differently. God could be calling some of us to serve Him right now in our homes, our workplace, or even our local parishes. Others may receive a call for more adventurous tasks. That’s the beauty of the mission world; there is no right or wrong way to follow your calling. Everyone’s calling is unique and chosen by God. He has a plan for all of us and it is neat to say that along my journey, I was able to make a friend with a similar calling.

It’s important to remember that your individual mission calling doesn’t necessarily mean you need to work alone. Look at Pauline Jaricot! She had a mission calling that started with herself, with 10 friends, and a few pennies! I’m sure that she never would have imagined that she would have pioneered the Society of the Propagation of Faith. I like to think of it as the Missionary Domino Effect. If Pauline Jaricot didn’t share her mission calling with her friends, the Missionary Childhood Association would not be here. If MCA were not here, you would not be reading Holly’s Headlines as you are today. I like to pray that someday one of my readers (which are most definitely considered my friends) will find their calling after reading the stories of mine.