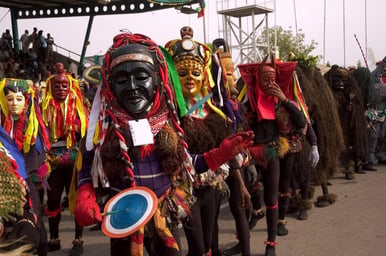 Autumn has officially arrived here in Pennsylvania. The leaves have started to turn color and are now beautiful shades of red, orange, and yellow. The temperatures have started to drop and the days have gotten shorter. I have started to unpack sweaters and jackets, paid a visit to the pumpkin patch, and have been brainstorming Halloween costumes and treats. I have always loved this time of year and all of the fun and spooky festivities that accompany it. This love that I have for the Halloween season is why I was especially excited when I got to visit Africa and experience their traditions and celebrations!

The journey to travel from the airport to "Igbo Land" in the southeastern part of Nigeria is quite a long one. This journey for me was when I encountered the Masquerades for the first time. I can clearly remember our vehicle beginning to approach a large crowd of what I thought were people dressed in costumes and celebrating Halloween. Father had explained to me that it was a traditional masquerade, and he assured me not to be fearful of this event. Let’s just say that was much easier said than done. We got out of the car and slowly walked through the crowd until we got to the front where we were greeted by a thick cloud of hot dust. The movements of the masqueraders were kicking up all of the hot, desert-like terrain. It made it hard to see/focus at first. Once I adjusted to looking through this cloud of dust, I was able to see the masqueraders for the first time. I was completely mesmerized with their costumes, their dancing, and even their intimidating chants. Honestly, I was confused why Father had told me not to be scared. My first wish was that I had my camera in my hands to capture this event, but of course it was still packed away in my suitcase in the car as I had just arrived that day.

In Igbo Land the masqueraders are seen as superior beings and only permitted to be performed by adult males. When a masquerade is seen in public, those who are participating are to be treated with utmost respect. It is believed that they embody characteristics from both the spirit world and the human world. A traditional Masquerade requires a team of vocalists and musicians who wear masks on their face and are covered from head to toe with a bright colored piece of clothing and/or bamboo rafters. Some of the Masquerades are joyful with brilliantly decorated and vibrant masks signifying the beauty among others. There are also Masquerades known as "sinister masquerades" which are feared by onlookers whenever they make an appearance.

While I was fortunate to have had such a great first Masquerade experience, I was not quite as lucky during my second encounter. A few days later I had finally arrived in Igbo Land. Much to my surprise I could see in the distance another Masquerade. I had asked Father if we could go and observe since I had such a great time watching the last Masquerade. At this point in time I had no idea that there were "sinister masquerades." I had assumed that Father was just giving me a heads up a few days ago, as I had never been to a Masquerade and the large crowds and performance could be a bit overwhelming. We began driving toward the Masquerade and I noticed immediately that this was unlike the last one. There was no crowd surrounding them and this time I had my camera right in my hand! I held it up and started snapping pictures of the performance. Just as quickly as I had started taking pictures, Father pushed my camera down and put our vehicle in reverse. We started driving fast away from the Masquerade and as I looked in my rear view mirror I could see that they were chasing us! I was instantly overcome by fear. Not only was I getting a verbal lashing from Father saying "You NEVER take photos of a Masquerade unless you get permission, and the sinister ones never allow photographs!" It was at that moment that I discovered the concept of a "sinister masquerade." With my adrenaline high and my heart beating fast, I could feel the sweat beads pouring off of my head and my stomach sinking. I started reciting prayers in my head and thought, as a missionary I vowed to leave my life in God's hands.

Since we were in a vehicle and the masqueraders were on foot, we eventually lost them. I certainly learned my lesson. Hence, during my only other encounter with a Masquerade on this journey I made sure to ask for permission to photograph them. This time I could tell that the masqueraders were harmless. In fact, they were little children dressed up and pretending to be adult masqueraders! It reminded me so much of a Halloween style costume where you can pretend to be anything you want. These impoverished children were living out their dream for just one day! These children in mission countries have big dreams, like most children do. They dream of becoming doctors, lawyers, educators, even masqueraders if that is what the Lord is calling them to do. Unfortunately, many of these children do not have the means to follow their dreams, but you can help and change that.

Your support of the efforts of the Missionary Childhood Association help mission children on Halloween and year round. Now that’s the best treat!

Happy Halloween to all!

We hope you have enjoyed the “Hol(l)y Headlines!” blog, which offered "news from the Missions you can use in your life" and "how you can be a part of it through the Missionary Childhood Association (MCA) and the Pontifical Mission Societies."  This is the last blog from author Holly Benner who had been the MCA National Coordinator and remains the mission education coordinator in her home Diocese of Allentown, Pennsylvania.