Planting the Seeds for Success 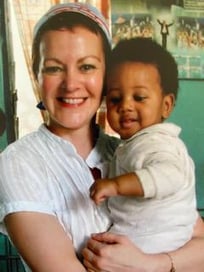 One of my most cherished memories from my mission trips was working with orphaned children cared for by local Sisters. Many of these efforts in the Missions ~ like the orphanages I spent time in ~ are supported by donations from children here in the United States through the Missionary Childhood Association.  The Sisters there provided children with all their basic needs, as well as a place they could call home. Many of these children did not just suffer from being parentless, they often suffered from malnutrition, HIV/AIDS, and infections from contaminated local drinking water.

While working at one of the orphanages in Uganda, I met a young girl who was only fourteen years old. She had been homeless for most of her pregnancy. When asked about her family, she explained to the Sisters and me that her parents gave her an ultimatum: either to get an abortion or to get out. She chose to keep her baby and showed up at the orphanage in desperate need of healthcare, shelter, and nourishment. Without question, the Sisters welcomed her.

Very quickly we discovered that this young girl was already in her third trimester. How did we discover this you may ask? Well, within only two short weeks, she had given birth to a beautiful baby boy. As to be expected by her lack of care throughout the pregnancy, her son was born tiny, but appeared to be happy and healthy. Unfortunately, within just a few days, we noticed that he wasn’t developing properly. He was having difficulty swallowing, often refusing food, and appeared to be losing weight quickly. It was clear something wasn’t right. A local doctor was called and sure enough, this newborn baby boy was diagnosed with fetal malnutrition. The Sisters and his mother followed the advice of the doctor, but due to limited resources, only two weeks later the poor baby boy passed away.

Although the young woman's heart was broken from the loss of her child, she couldn’t find it in her heart to go back to her parents. She ended up staying at the orphanage and helping the Sisters. Years later, I returned to visit this same orphanage. Much to my surprise, the same young girl that I had welcomed into this orphanage as a pregnant teenager was now a Sister herself! She was now going out to find homeless, pregnant young girls, just like her, who needed care, and showing them ~ as she was shown ~ the tender, loving heart of our Lord.

While this success story is by far one of my favorites, there is one African orphan success story that will always hold a special place in heart. As the story goes, there was a young, eight-year-old orphaned African boy. His older sister, just 12 years old herself, was unable to take care of her brother, and two Italian Comboni missionaries working in Uganda, Bishop Sixtus Mazzoldi and Father John Marengoni, took the boy in. This boy grew up to himself become a priest, and not just any priest, but one of the first priests of the Apostles of Jesus (AJ) ~ a religious missionary order of priests founded in Africa by Bishop Mazzoldi and Father Marengoni.

As I mentioned previously, this story will always hold a special place in my heart, and that is because this priest in 2006 held the title of "Superior General of the AJs" in the United States. Why is that important, you may ask? Well, just as God always has a plan in place for us, it was part of God's plan that I would come to meet him. And the rest became history! I owe all of the many years that I spent working as a missionary in the eastern part of Africa all to Father Paul O. Gaggawala.

We spent many years traveling and reaching out to those in need in Africa. On our adventures, we became friends, with my learning more about his life story on each trip we took. A short summary will never do justice to all of the good that Father Paul has done for the poor throughout the years, but the most incredible part of his story is that an African orphan grew up to become a priest, devoting his life to the Lord, and spending years focused on giving African children, who like himself were parentless and lost for direction, the resources to write beautiful success stories of their own.

Father Paul held many impressive titles but never let that change the humble attitude that he always portrayed. He made an impact and captured the hearts of nearly everyone he met, and this certainly was proven true this month.

Unfortunately, Father Paul lost his battle to COVID 19 on January 10 of this year, while in his home county of Uganda. The words spoken about him at his services were all one in the same, touching on how incredible a man with so much success could hold such poise and humility. I will forever cherish my working relationship and most importantly my friendship with Father Paul. Indeed, his story remains my utmost favorite success story of an African orphan.

Consider helping to write a "success story" for a child orphaned today in the Missions, with your prayers and a donation to the Missionary Childhood Association. Give in memory of Father Paul. May he rest in peace.

Resolution for a New Year...

Over 140 million children under the age of 18 in the developing world have lost one or both of their parents. In Sub Saharan Africa alone there are 43 million orphans, with numbers increasing due to the current global pandemic. These children are in need of adequate food, health care, clothing, education and psychosocial support. Sisters in these homes for orphaned children need your help through the Missionary Childhood Association. Make your New Year's resolution to give a child a “fresh start.” Help a child in the Pope’s missions today.