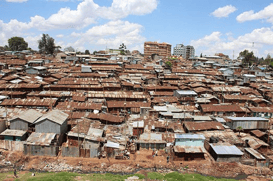 Amazing Grace, how sweet the sound that saved a wretch like me...  We all know how the song goes, and every time I hear it I think of a holy woman I have been blessed to meet. Her name is “Grace,” and she is from the Ongata Rongai slum, which is located in Kibera in the southwest of Nairobi in Kenya. 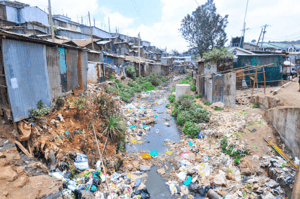 I met Grace, along with her son Edwin, when I would accompany the Evangelizing Sisters of Mary. We would visit the sprawling area of shanty houses, with open sewers and mud lanes, roads full of glass, garbage and vermin. Along with a few of her friends, we would gather in Grace’s home to pray the Rosary, share our faith, and always end with her favorite song, “Amazing Grace.” To me, she was amazing. While visiting with Grace, one could feel the presence of Christ.  Her tin-roofed shack is a single room that serves as a kitchen, living room and bedroom with no electricity or running water.  After the death of  Grace’s husband, life has become much more stressful and dangerous for her. At nighttime she would bend a nail into a door latch and pile her two chairs in front of the door. With robberies prevalent, Grace had become a target, but fortunately she had not been assaulted. Many women in the slums become victimized after the death of their husbands. In some cases their children are kidnapped and sold for child trafficking. 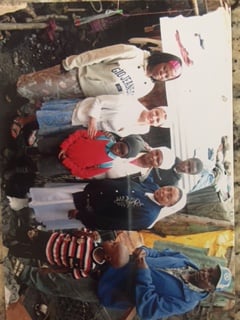 Most residents here live in extreme poverty making less the $1 per day. As a widow, Grace became the sole provider for Edwin. She continued to run the meat shop that her husband operated.  Her meat shop (without electricity) contains  meats supplied by villagers in rural areas. After paying for their meat, and paying her rent of $.14 cents per day, there is very little left over to feed Edwin, and no money for his education. There are a few schools and most people cannot afford an education for their children.

Throughout the world there are mothers like Grace who will go to the extreme to feed their children. The neighborhoods in the slum areas are often far from the jobs that are available. Commuting expenses are costly, and the time away from their children is difficult. Though they earn more than they would in some villages, their lifestyle is much less from an economic standpoint. In urban areas these women become significantly poorer, especially since basic needs such as food, shelter, clothing, and transportation are more expensive. Women also suffer from security threats when they travel to and from their work areas. The more visible women are in roles outside of their homes, the more they and their children are targeted with various threats.

The most vulnerable women in these areas are those suffering from HIV/AIDS, and single or widowed women like Grace. Their circumstances contribute to their being economically exploited as well. Despite their oppression, they are always ready to respond to and participate in poverty alleviation programs. Such programs will train vulnerable women to learn how to read and write, how to sew, in doll making and craft work. These educational programs help to train women so they can start their own businesses, and generate an income to support their families . By doing so, this provides them with the help they need to provide a supportive safe environment for their children and themselves. 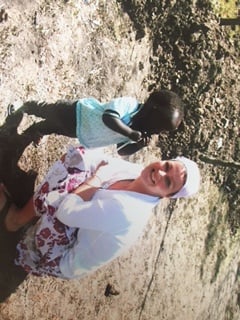 As for Grace and Edwin, I get frequent updates from the Sisters on how their lives are going. I am very happy to say that Grace is doing well. She still sells her meats and was able to renegotiate the price of her rent, allowing a few extra cents in her budget. With this additional income, she hired a Masai man (In Africa Masai are known to be fierce fighters) to protect her and Edwin, until Edwin grows into manhood. As for my buddy Edwin, I heard from the Sisters that he is growing into a respectful courageous young man. He is being educated by the Sisters and is very close to God. With the grace of God, maybe someday I and others will call him, Father Edwin.

I once was lost, but now am found, 'twas blind but now I see…

Grace and Edwin...until we meet again, holding you in heart and prayer. 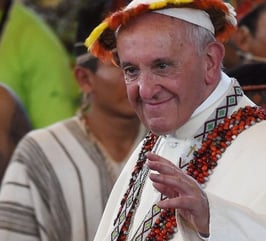 In light of the centenary (on November 30, 2019) of the Apostolic Letter, Maximum Illud, with which Pope Benedict XV wished to give new impetus to the missionary call to proclaim the Gospel, Pope Francis has called for the whole Church to observe an Extraordinary Missionary Month (EMM) this coming month of October, which is also World Mission Month.

The Pope suggests four dimensions of the EMM ~ and MISSIO has four ways for you to live out each one.

1) a personal encounter with Jesus Christ alive in His Church: Eucharist, Word of God, personal and communal prayer. Sign up to receive a free daily email during October with inspirational words from Pope Francis, and the Psalm for the day.

2) the witness of the Saints, the Missionary Martyrs, and the Confessors of the Faith, who are unique expressions of the Churches throughout the world. Read about missionary witnesses like Sister Dorothy Stang, SNDdeN, who was martyred in Brazil in 2005 because of her defense of Indigenous people and the Environment. There are also more missionary witnesses featured on this special MISSIO resources page.

4) missionary charity as a material support for the immense work of evangelization, especially the missio ad gentes and Christian formation in Churches that are most in need. Explore MISSIO... encounter your brothers and sisters in the Missions... and, with your support, empower mission priests, religious and pastoral leaders to help the world's most vulnerable communities, like Kibera.

Here's wishing you an "extraordinary" month ahead!