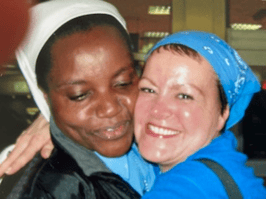 There I was, a U.S. lay missionary traveling in an SUV full of African nuns on our way home from a long, hot day of mission work in the slums. Suddenly, we came across an armed robber. Might I just add that I have never driven in reverse so fast in all of my life! Even though I was raised in the country of Pennsylvania, where we participated in all sorts of somewhat reckless behaviors with our vehicles, this by far was beyond my wild childhood memories. At this particular moment in time, I was a 40-some year-old woman, finding myself grasping hands with religious Sisters, as the vehicle was suddenly shifted into reverse.

Honestly, it all happened so fast! We were gathered in the SUV, sharing stories of our work that day, all excited to get home to the compound where the Mother Superior, named Anna, was waiting for us to return for our evening dinner. All of a sudden, the car came screeching to a halt, and the Sisters started to talk so quickly that I could hardly understand them. The driver of the vehicle quickly pulled a “k-turn.” It was at this point that I could physically feel my stomach sink. Between the sudden movements of the vehicle and the loudness of the normally soft-spoken Sisters, my mind was racing. I wasn’t sure if this was real or not – but, unfortunately, it was all too real. I wasn’t sure if my nervousness was that noticeable until Sister Christine grabbed my hand tight and said to me, “Start praying the Hail Mary.” As we were all praying and I was now holding ever so tightly to Sister Christine’s hand, I kept turning around watching the big Jeep that was chasing us that was filled with quite a few men and large guns.

Never in my life did I think that I would find myself in a situation such as this. Also, never in my life did I think that a religious Sister could drive like that! Ultimately, it came down to saving our lives, so I’m sure that anyone in that situation would pull out skills that they didn’t know they had. Eventually the “bandits,” as the Sisters called them, gave up on the chase. Why were they chasing us? We will never know. Why did they suddenly give up on the chase? We will also never know. Just like that, as quickly as it all began, it was over. It was like being on a roller coaster that quickly comes to a halt.

When we finally arrived back at the Sisters’ mission compound, Mother Anna was waiting for us at the gated entrance. With cell phone technology, which was newer in that area, she had already heard news of the danger that we had encountered. I remember getting out of the SUV, my sweaty, weak, dirty, frightened body wanted nothing but a comforting hug. I will never forget the feeling of relief that overcame me as Mother Anna approached me with opened arms, embracing me, and saying my name. This embrace and loving words gave me a feeling as if I was a child being comforted by the arms of my mother. Ironic that this experience was played out with the Mother Superior herself? Of course not. It was a true God moment.

No matter who we are or how old we are, we all have a longing for our mother’s embrace. For some of us, this may never physically happen again. For others this may still be feasible. For those, for whatever reason it may be, who are not physically able to be comforted by your mothers, it is important to remember the times that you had been. This Mother’s Day, think of how many different titles a mother can have and how with each title comes the gift of comfort: Mothers, grandmothers, godmothers, adopted mothers, foster mothers, stepmothers, and yes, even mother superiors. Take the time this Mother’s Day to thank all of these women in all of these different roles for their devotion to keeping you comforted in your time of need, an earthly reminder of the Mother of us all, given to us by the Lord Himself from the cross. 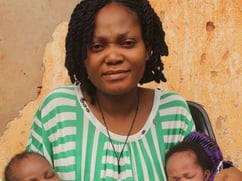 What do most mothers want for Mother's Day? Topping the list, according to one article, is time with family.  Motherhood can be an adventure. Adventures can sometimes get you into extreme difficulties. But, adventures can also get you to the top of a mountain where you can touch the stars. During this month of our Blessed Mother Mary, help a mother in a mission country reach the top of her mountain and touch the stars to help her children in need.