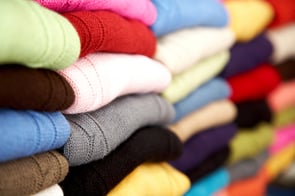 At Thanksgiving, most of all, I like to spend time reflecting on my life, and all of the things for which I’m most thankful. I have been so blessed with the gift of bringing goods to countries where people might not find it quite as easy to find reasons to be grateful. To some degree, I understand their struggle which is why I am so passionate about my mission work. Let me explain a little bit about my past, and how one beautiful little African girl's story truly hit home for me.

Being the youngest of six children, and the only girl, you would probably assume that I grew up wearing the most beautiful dresses and had all of the dolls and girly things that I could possibly want. However, that was certainly not the case. I grew up in a very poor family where, at times, I only had my older brother's hand-me-down clothing to wear. When I was first born my family didn't even have indoor plumbing, and my "crib" was a dresser drawer in my parents’ bedroom. Growing up like this was very humbling and really led me to appreciate every small thing that I had. This is also part of the reason why I was so thankful that I was able to afford beautiful clothing for my only child, similar to the clothing that I remember admiring other girls wearing when I was young.

On my very first trip to Africa, one of the things that the African priest that I had traveled with expressed to me was the dire need for clothing in his village. Most of the local families were large, and the parents simply could not afford clothing for all of their children. As my parish family came together, excited for this mission God had called me on, parishioners would bring clothing to me to distribute on the mission trip. I clearly remember scrambling on the morning of my departure and making a last-minute decision to slip some of my own daughter’s outgrown clothing in my suitcase. I said a special prayer on that flight asking God to bring a little girl into my life who could fit into the special garments that I had packed so quickly. Sure enough, my prayers were answered.

As I went out through the village each day, Father and I would take as much clothing as we could each carry. I was instructed that I should only distribute one piece of clothing per child, as there were too many children in need to provide each one with a full outfit. So, some children received a shirt or a sweater, while others received a pair of pants or shorts. As I distributed the clothing each day, I noticed myself holding on to one particular item, a blue sweater, which belonged to my daughter. This sweater had such a special meaning – a Blessed Mother blue sweater that I bought for her to wear to match me one holiday. I just knew in my heart that the right little girl would be in that village, and low and behold, she was.

On the last day of my trip we set out to distribute the last few articles of clothing that we had left. As I entered a hut I noticed a beautiful little girl peeking out from behind her mother. Father translated for me as we spoke with her mother and I came to find out that this little girl was one of six children, five older brothers and she was the youngest. It still gives me goosebumps telling this story, because in that little girl, I saw my younger self. I immediately knew that she was a perfect fit for that Blessed Mother blue sweater. So, without hesitation, that is exactly what I handed her. I can still see her face light up when she put it on and walked around, so full of confidence, as if she was ready to conquer the world.

Father remained in contact with the families of his village and years later I came to find out that the same little girl who received that blue sweater went on to do just that. With the assistance of a local religious order, she went on to attend University and upon graduating she started working in the missions to help better the lives of children who grew up in poverty just as she did. Hearing this news I felt even more as if this little girl was a mirror reflection of my own past!

So, at Thanksgiving or any time, take time to reflect on all that we have to be thankful for, no matter how big or small, and let us not forget that through God's grace anything is possible. 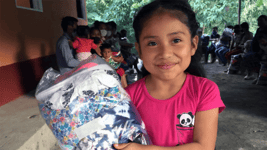 According to one source, there are currently more than 25,000 consignment, resale and Not for Profit resale shops in the United States. Why not help them help others? As a family, go through your closets and drawers to find clothing you haven't worn in awhile, but that's in good condition. Donating these items to a consignment shop will help raise some money that you can then donate to the Missionary Childhood Association to help religious Sisters provide clothing and more to children in need in the Pope's missions.