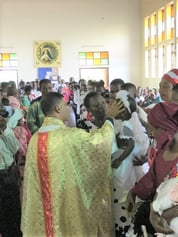 Let us allow ourselves to ‘be opened’

Through original sin our souls became splintered and self-absorbed. But God never abandoned us.

Today’s readings remind us over and over how important we are to God. One by one, He made us and, one by one, He wants to heal us. In our human lives we are not experiencing what God originally planned for us. Through original sin our souls became splintered and self-absorbed. But God never abandoned us. But God was willing to send His Son to save the world, even at the price of His own life. In the Gospel this Sunday, Jesus and His disciples have traveled to the Decapolis, a region of ten cities that was a center of Greek and Roman culture. We hear that some people have brought a deaf man with a speech impediment to Christ. They hope that He would heal him. We do not know whether these people or the man they presented to Jesus were Jews or a Gentiles. But we do know that he was suffering and unable to readily communicate with those around him. Jesus immediately drew him aside to help him. “He put His finger into the man’s ears and, spitting, touched his tongue; then He looked up to heaven and groaned, and said to him, ‘Ephphatha!’ – that is, ‘Be opened!’ – And immediately the man’s ears were opened, his speech impediment was removed, and he spoke plainly” (Mark 7:33-35).

“Ephphatha!” St. Mark makes a point of using the Aramaic word that Jesus would have spoken in praying and in curing the wounded body and soul of this man. And once again, we learn that a crowd was astonished by what our Lord did. Yet making the deaf hear and the mute speak was more that a beautiful gift for that one person. It was a reminder that His life was given as a prayer and a restoration for each of us to have the full life God always intended. If we open ourselves to God’s mercy and grace, we can be transformed into the people we were created to be in His image on earth as we prepare for our heavenly home. Let’s listen to Christ and allow ourselves to be opened.