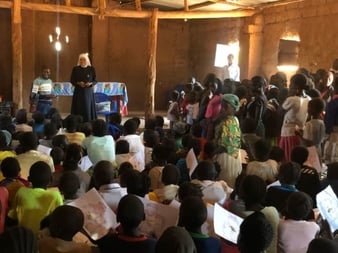 What we think of as the ways of the world are not and never have been the ways of our Eternal Father.

The Scriptures today invite us to turn away from old ways of doing and seeing things. Instead, we hear that God wants us to open ourselves to Him. If we are willing to do so, His grace and mercy will transform us into the people He calls us to be. In the Old Testament reading, we hear the Lord telling the prophet Jonah to go a city known for its sinful ways to announce that He would destroy them if they did not repent. “Jonah began his journey through the city, and had gone but a single day’s walk announcing, ‘Forty days more and Nineveh shall be destroyed,’ when the people of Nineveh believed God; they proclaimed a fast and all of them, great and small, put on sackcloth” (Jonah 3:4-5). The people eagerly embraced this chance to save their lives by changing their ways. And God forgave them.

What the rest of the Book of Jonah tells us is also stunning: Jonah is angry and disappointed that Almighty God has relented, allowing the people of Nineveh to live. Because they are Assyrians and enemies of the Jewish people, Jonah wants them to suffer and die. In this story, as in the other readings, we learn that God loves and wants every person of every nation to accept His mercy. What we think of as the ways of the world are not and never have been the ways of our Eternal Father. St. Paul reminds us in his letter to the Corinthians that the world in its present form is passing away. And, while this is not happening as quickly as many early Christians thought it would, it is happening. The Son of God came to change our hearts. He did not do it in any way that we humans tend to see as power and might. Jesus came to teach us with His compassion and save us with His death. Then in three days our Redeemer rose up from the tomb, taking us with Him. Returning to Jonah’s story, when God first told him to go to Nineveh, he had refused. He ran away, boarded a ship and eventually found himself in the belly of a great fish. God released him after three days. This famous incident is often seen as a symbol of Christ’s Resurrection. What is especially important to understand is that, whoever we are, God loves, forgives, and changes us – if we only let Him.