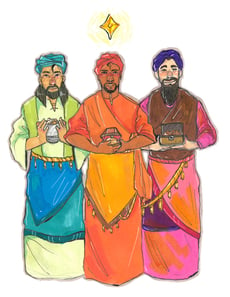 Today’s feast of the Epiphany is one of the oldest celebrated by the Church. It focuses on the manifestation of the Holy Child to the Magi who represent all Gentiles.

While Jesus comes to the Jewish people from the line of David the King, it is with the arrival of the wise men from the East that the wider world begins to share in the unfolding of salvation that comes through the newborn King. “And behold, the star that they had seen at its rising preceded them, until it came and stopped over the place where the child was. They were overjoyed at seeing the star, and on entering the house they saw the child with Mary His mother” (Matthew 2:9-11). Many people must have seen that mysterious star, but only these Magi did far more than notice it. They paid attention and knew that it was vitally important. They were educated, rich men, possibly kings themselves. They associated the star with both royalty and with the Jewish nation. So they gathered gifts fitting the birth of a King and ventured to Jerusalem where the unscrupulous Herod directed them to Bethlehem.

And there, in the city of David, the wise men knelt and venerated Jesus. We know nothing of their lives after they went back to their homes. Whatever became of those remarkable visitors, surely, like the shepherds with whom they seemed to have so little in common, they were in some way changed. For even now, anyone who encounters the Son of God and stays open to His message of truth and love, can never be the same. He came to save us for eternity – and to transform our hearts and lives today.