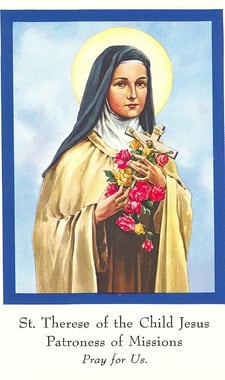 Today we celebrate one of the best known and loved of all saints: St. Thérèse of Lisieux, the Little Flower.

She was the youngest of an extremely religious French family with five daughters, all of whom became nuns. Thérèse had an intense devotion to Jesus and Mary from her early childhood and wanted to enter the Carmelite convent as soon as she could. That happened at age 15 and she spent the remaining nine years of her life following her “little way” of holiness. In seemingly uneventful days balancing prayer and work, she opened herself to God’s transforming grace, so that every thought, word and deed became an act of love for her Lord.

Thérèse is noted for her childlike simplicity in all she did, as recounted in her autobiography, The Story of a Soul, which has influenced people the world over. So she must have treasured Jesus’ words in today’s Gospel, “Whoever receives this child in My name receives me, and whoever receives me receives the one who sent Me. For the one who is least among all of you is the one who is greatest” (Luke 9:48). Yet this humble young nun also had the spiritual maturity to unite her great physical and mental anguish to the Passion of Christ. Her continual prayer and sacrifice on behalf of the Church’s missions and missionaries led to her being named a patroness of both. She died in 1897, was canonized in 1925, and named a Doctor of the Church in 1997. St. Thérèse's parents, Louis and Zelie Martin, were also canonized in 2015.

October is Mission Month.
Be a voice for mission with MISSIO.
Access resources for your parish and/or school.