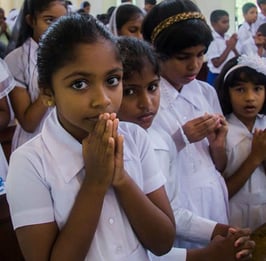 On this day after Christmas, we honor St. Stephen who was the first follower of Jesus to be martyred.

He was among the initial deacons to be chosen. These were people who were designated to assist those early members of the Christian community who were in need. But, in addition, Stephen was known as a courageous speaker who stood up for our Lord’s message of redemption against those who would not believe or even willingly listen to His truth. “(People) came forward and debated with Stephen, but they could not withstand the wisdom and the spirit with which he spoke.… They were infuriated.… But he, filled with the Holy Spirit, looked up intently to heaven and saw the glory of God and Jesus standing at the right hand of God” (Acts 6:9-10; 7:55).

Despite being persecuted, driven out of the city and stoned to death, Stephen would not deny Christ. Instead, he trusted in our Savior and forgave his killers. Stephen followed in Jesus footsteps and became just the first of countless Christians who would lay down their lives in defense of their faith. We can turn to St. Stephen as a model of fidelity and perseverance during our own struggles in speaking up for our Catholic beliefs as well as living them out in the fullest way possible. Today, we recognize Stephen as the patron of all the Church’s deacons.