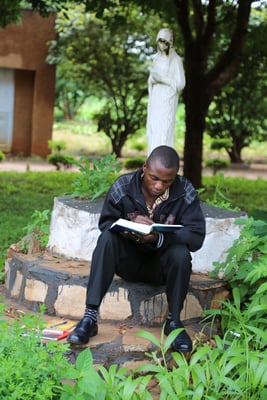 St. Maximilian offered his whole life to Jesus through Mary

Today we celebrate a brave priest and martyr of the 20th century.

From his youth St. Maximilian Kolbe was dedicated to the Blessed Virgin Mary and wanted to be ordained in order to give his life to her Son. He became a Franciscan and resolved to fight against the spiritual indifference that he saw as too prevalent. Father Kolbe also encouraged devotion to Mary through popular religious publications in his native Poland and elsewhere in Europe and as well as in Japan. His life of prayer, work and sacrifice made him a leader in his community and among others consecrated to Our Lady.  “Amen, I say to you, unless you turn and become like children, you will not enter the Kingdom of heaven. Whoever becomes humble like this child is the greatest in the Kingdom of heaven. And whoever receives one child such as this in My name receives Me” (Matthew 18:3-5).

Arrested by the Nazis in 1941, he offered to take the place of a husband and father who was one of 10 chosen to starve to death in retaliation for the escape of a prisoner. He led the men in prayer and song, as they lay naked in a dark cell in Auschwitz. Finally, St. Maximilian Kolbe was the last alive and he was murdered by a syringe of carbolic acid. He died as selflessly and faithfully as he had lived.