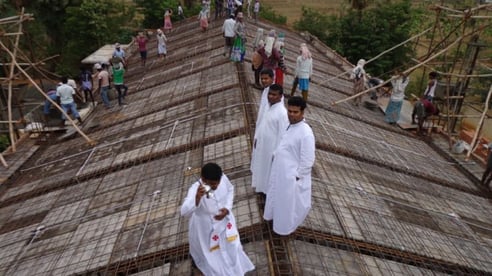 “As Jesus passed by, He saw a man named Matthew sitting at the customs post. He said to him, ‘Follow Me.’ And he got up and followed Him” (Matthew 9:9).

On this feast of St. Matthew we remember the man that Christ called to leave his life as a tax collector for the Romans to become one of His disciples. Here was a Jew who was earning a very good living for himself by cheating other members of his Jewish community. By the very nature of his job, Matthew would have been considered a sinner and collaborator with the Empire that had conquered their nation. Yet Jesus saw something more in this man – and Matthew responded willingly. He immediately left his old life behind to join the company of an itinerant preacher who offered him nothing of value to the world – and absolutely everything of value for eternity.

By tradition, Matthew wrote one of the Gospels, although there is some debate on whether he was actually the author. However, St. Matthew, referred to as Levi in the Gospels of Mark and Luke, is believed to have become a missionary, traveling through Ethiopia or Persia. And He is thought to have been martyred for his faith in the man – the Son of God – who spoke the words that changed his life: “Follow Me.”