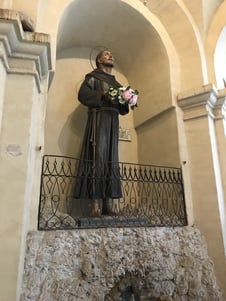 Emulating Jesus in all he did...

Francis of Assisi is one of the most revered saints, not only among Catholics and other Christians, but also among those who appreciate his commitment to walking simply and sincerely in the footsteps of Jesus.

Francis spent his youth enjoying the pleasures available to the son of a wealthy cloth merchant. In 1202, at age 20, he took part in a military campaign and was captured. He became ill, and began to examine his soul and to pray. He soon turned his back on his former way of life. He embraced the humility of depending entirely on God and the poverty of following Christ as closely as possible. While many relatives and friends abandoned him, Francis was soon joined by others who also wanted to imitate our Savior in all things. He became an itinerant preacher, joyfully spreading the Good News to all he met. He certainly took seriously the words of Jesus, “Take My yoke upon you and learn from Me, for I am meek and humble of heart; and you will find rest for yourselves. For My yoke is easy, and My burden light” (Matthew 11:29-30).

In time, Francis founded the Order of Friars Minor, as well as an order of cloistered nuns that he founded with St. Clare. And he established an order for laypeople, now known as the Secular Franciscans, who wanted to model themselves on Christ, but could not leave behind their homes and other obligations. By 1219, there were more than 5,000 Franciscans. He tried to become a missionary, but hardships sent him home where he continued his efforts throughout Italy, influencing many Christians to a closer relationship with our Lord. Francis, who had received the stigmata, was nearly blind, and suffered from the result of his continuing penances, died in 1226. He was declared a saint two years later. This little poor man of Assisi – and the world – who rejoiced in the beauty of God’s creation is the patron of ecology and of animals.